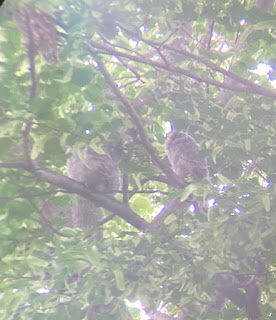 On my back patio Wednesday morning, I noticed unusual activity in our littleleaf linden tree. The
house wrens were chattering and darting around, the robins were scolding, the blue jays were dive-bombing in and out at a furious pace. For a moment it looked as if something was falling, a strange grey shape that dropped from a lofty branch but never hit the ground. I watched a few minutes, mystified, then grabbed my binoculars from the patio table and went to investigate.

From most angles I could see nothing but the small neighborhood birds, darting in and out. Finally, from a back corner of the yard, I saw more grey shapes, two, larger than the blue jays, silently clinging to branches 30 to 40 feet up in the tree. Puzzled, I scanned the nearby branches until I saw a more identifiable shape: an adult great horned owl, peering down at me.

I had never seen such young great horned owlets, but some quick research convinced me that's exactly what they were. The birds nest in abandoned squirrel, crow or hawk nests. The owlets emerge from their nests before they're old enough to fly, then spend a few weeks perched on branches, waiting for food, strengthening their wings. They're the most suburban of owls: sometimes nesting in back yards, or busy parks, near highways, anywhere they can find an empty nest high enough for their use.

I wondered if there was a nest hidden high in that tree. There are plenty of squirrels in my yard, but I've never found their nests. I wondered if they'd fledged in the tree itself, and if that other shape I saw was a third baby owl, falling from its branch and grabbing hold of another branch before it hit the ground. I went back to look again later in the day, and sure enough, now there were three, sitting very still with a watchful parent nearby. I took a grainy photo, hoping they'd linger a day or two so someone could come take some better photos before they left, but the next morning the tree was quiet with no sign of baby owls.

I've been thinking lately of how very little we really know about the world around us. We've been living through a global science experiment, testing out the efficacy of masks, of vaccines, of social distancing, our lives constrained by invisible microbes unknown and unnamed just two years ago.

In the process, we've also been learning about the world within us: how internal conditions can impact our resistance to disease or help us back to health.

I had my first glimpse of the human microbiome three decades ago when our tiny daughter spent weeks on a powerful antibiotic. The medicine was needed to fight life-threatening strep pneumonia, but also killed beneficial bacteria. Her doctors warned it might take years to offset the impacts of that powerful drug. Since then much has been discovered about the human microbiome: the teeming microbial world in our intestinal tracts, respiratory systems, skin and hair. So far researchers have identified over a thousand different microbes helping process food, fight off disease, or causing disruption and harm.

There is so very much we don't see, don't know, don't understand. I suppose with the right equipment, and enough time to spend, I could have tracked those baby owls. But despite huge investments in time and technology, ornithologists are still uncertain about some bird species' breeding grounds, or how birds navigate on long migrations, or how they know when to begin those migrations.

Despite plenty of research on how to rebuild a disrupted human biome, there is still much we don't know: does yogurt really help? What about probiotics? Vinegar? Wine? Are there different remedies for different people?

Gathered for pizza last night on my daughter's patio, the conversation turned to alien invaders. I had somehow missed the news this week that aliens had / had not been confirmed in Roswell, New Mexico, UFO capital of the world.  After a short amusing discussion, I had no clearer idea of what the news had been. Apparently, the news was that there's no news:

"U.S. officials and analysts who examined video footage from U.S. Navy planes and other records say the evidence doesn't point to alien technology — but they also say they can't explain the unusual phenomena." 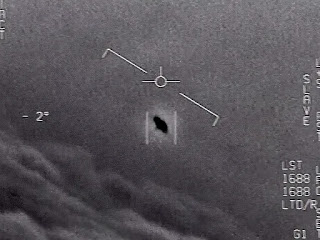 Our church is studying Acts, and I've been reading in Acts in my morning readings. The coming of the Holy Spirit left the crowd accusing the disciples of being drunk. The healing of a man crippled from birth left the crowds mystified and religious leaders angry. The transformation of Peter from frightened fisherman to fearless preacher and teacher left onlookers perplexed or completely convinced.

I grew up in churches that barricaded themselves against the work of the Spirit: insistent that God worked in signs and wonders in the days of Acts, but those days are over and won't return. I don't remember hearing the term "cessasionist" as a kid, but I do remember lots of talk about "dispensationalism," and the grave certainty that God works within defined limits of time and space. I was never sure what those church leaders meant, but quite sure they were wrong.

I remember listening to stories from my grandmothers' friends, missionaries in places like Ethiopia, where they had done spiritual battle with witch doctors, taken part in exorcisms, seen dramatic healings. As women, they were allowed to talk to our gathered Sunday School about planting churches in African villages, but not allowed to tell those dramatic stories. And although they preached and taught in other countries, they were not allowed to speak from the pulpit in the American churches that sent them.

We miss so much by our own inattention, our determined refusal to listen, our predetermined categories, our amazing arrogance. We know so little, yet we think we understand enough to say what's real, what's not, what's worth our time, what isn't.

Owlets, UFOs, microbes, miracles; we see in part, we know in part. I'm thankful for what we see and know. I'm open to seeing and knowing more.

I'll be worshipping in church this morning, taking communion (bread only so far thanks to Covid precautions), ending as we always do with this prayer:

Almighty and everliving God,we thank you for feeding us with the spiritual foodof the most precious Body and Bloodof your Son our Savior Jesus Christ;and for assuring us in these holy mysteriesthat we are living members of the Body of your Son,and heirs of your eternal kingdom.And now, Father, send us outto do the work you have given us to do,to love and serve youas faithful witnesses of Christ our Lord.To him, to you, and to the Holy Spirit,be honor and glory, now and for ever. Amen.

Posted by Carol Kuniholm at 9:47 AM