What If Newness Was the Norm?

The Synchroblog theme for April is “What If . . .”

The invitation is to “try to imagine that some or all of the Bible narrative is not necessarily true history, but is myth of one sort or another.  What sort of effect would that knowledge have on your faith?  What effect might it have on the larger church?  How would it change you?  Would it change you and how you view the world?”

Maybe I’ve spent too many years in the Episcopal Church, or too many years working with youth and young adults, or maybe it was my years of graduate study at an Ivy League university, but I find the “what if” of “maybe this is myth” a dreary, far too predictable dead end.

I’ve seen how it affects the church to casually discount large swaths of scripture as myth, and I’ve seen, up close and personal, the shaken commitment when each of us becomes arbiter of what is, and isn’t, true.

I’m willing to talk that through with someone I care about, over a good latte, if occasion demands it. But heading down that rabbit hole reminds me of an endless “Waiting for Godot” performance I attended years ago. Interesting to visit, but I wouldn’t go for fun.

Puzzling about the “what ifs” that energize and engage me, I came across a recent post by Byron Borger at Hearts and Minds booknotes. I’ve been blogging about newness – and this post, “Resurrectionary Reading,” seemed to pick up just where I left off.  I wrote last week about the way the newness of the gospel undermined the , helped bring the downfall of Communism. ’s piece picks up the story, and digs further into this question:

I agree so strongly with ’s post I’m quoting it at length, and yes, even borrowing some of its graphics.

“, 1984. ‘Christ is risen!’ As the cry went out, the crowd of mostly Catholic trade unionists shouted back with confidence ‘He is risen indeed!’ Not unusual for a resurrection service, the cadence of the call and response echoing centuries of proclamation and hope. Yet, as this crowd understood, such public proclamation was pregnant with possibility -- revolutionary, even.  Soon, the dictatorial regime of communist Poland fell to non-violent protestors, Solidarity workers, alternative civic organizations, all swarming the streets inspired by the hope of the gospel, the truth of Christ's goodness unleashed in the world. Many of those history-makers understood the vast implications of Christ's bursting forth from the empty tomb.  We might borrow an image from musician Bruce Cockburn's Santiago Dawn, which tells of the Christian hope that drove peaceful protestors to resist the junta in 1980's , the people ‘rising like grass through cement.’  Indeed, in every hemisphere and continent the good news of Christ's resurrection has supplied courage for those resisting injustice.

For many the resurrection is a vindication of the belief that through Christ and his cross, God forgives our sins and we are reconciled with Him. This is gloriously true!  Yet, we might ponder these brave revolutionaries resisting totalitarianism, inspired by Easter; why did their belief in Christ's resurrection cause them to take on dictators?

The answer is endlessly provocative: they realized that Christ's resurrection is more than a final touch on the process that assures us of salvation but also a socio-political event. The Roman regime had locked Christ in his tomb, secured with a draconian royal seal and armed guards.  Easter's uprising broke the Imperial seal and in doing so broke the power of all repressive forces.

This aspect of the Easter morning narrative includes vivid anti-empire imagery, suggesting that Christ's sacrificial death accomplished more than the forgiveness of solitary sins.  The gospel's implications are broader: Christ does more than show mercy, but also transforms all of life. His resurrection revokes the power of personal sin and systemic evil, inner disorder and corporate dysfunction. Christ is victorious over death as it is writ large over a cursed creation.  Colossians 2:15 exclaims that Christ has disarmed even the "principalities and powers" by triumphing over them. Romans 8 reminds us that the entire creation has been groaning, oppressed. The visionary of Revelation promises "all things new" (the "all things" an echo of the early praise chorus of Colossians 1.)  A core New Testament conviction concerning the meaning of Christ's bodily resurrection is that Christ rules over this material world, across all aspects of life, in every sphere of culture, and that His new regime is coming ‘On Earth as it is in Heaven.’ 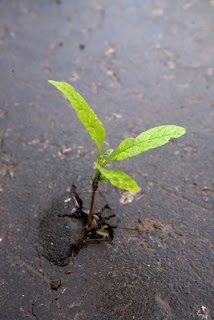 The resurrection is the central reality of human history, the truest truth that upsets idols and ugliness, defeats disorder and disaster. This means that in the living Christ there can be a restoration of order, rightness, shalom.  God's Kingdom is best understood as a renewal of the good but fallen creation.  Christ is King of His creation, and those united in His death, resurrection and reign are called to live into this shalom. The distorted ways of the broken culture are replaced, as we - like grass through cement - bring forth healing examples of new life. From sustainable economics to meaningful aesthetics, from dignified labor to trusting families, we imagine and then work to create hospitable neighborhoods, holistic health care systems, wise schools, responsible engineering; we explore all the implications of the resurrected life in a creation that is being restored.  The deathly Imperial seal lays broken, hurt is healed, God's life-giving Spirit is loose in the world, ambassadors of His holy rescue plan scattered like salt, like leaven, like light.

Ahh, but here is the rub.  To announce socially-constructive, culturally-relevant, Biblically-directed new life, we must necessarily ask what it looks like to embody this great good news.  Christ's victory extends "far as the curse is found" (as we sang in promissory hope during Christmastide) but what in the world do we do about it?

One of the answers--besides gathering regularly to announce through Word and sacrament the truth of Death's defeat in Christ's resurrection--is to read, and to read seriously.

If we are to do more than be "hearers" of the resurrection news, but are to embody it as good citizens of God's movement, we must unlearn a lot of the old ways and relearn even more.  Our way of life in the world is informed considerably by the ideas that we hold, which is why the Bible calls for the "renewal of our minds."  We are formed as new creatures by Word and worship, but also by study.  If Christ is bringing newness to all of life, then we must study all of life.  Christian people, God's vanguard of newness, must think well about "every square inch" of our lives, and should read and learn and talk about it all.  Where should we shop? What parenting styles might we embrace? What do we think about gender assumptions, how has racism distorted our attitudes and relationships, can we possibly have Christ-like holiness amidst sexualized media? What sort of entertainments are most renewing?  How do we fruitfully embrace technology, with whom should we live, for whom should we vote, how do we think about are careers and callings?

If Christ is risen and brings renewal to all of life, and we are to be agents of reconciliation in all of life - well, we've got work to do. . .

Those of us who are swept up into Christ's agenda of bringing newness might do well to step back from public proposals and pontificating, instead committing ourselves to a season of what might be called resurrectionary research. Given that Christ is risen, what should we think about the nature of our culture (its worst idols and greatest dysfunctions; its best graces and most normative strengths?) What are the most pressing problems in our world, and what insights might come from the creation-regained worldview brought by Jesus the risen King?  Our habits of heart and the subsequent social architecture of our land must be transformed - what might the resurrection mean for that? All of this will demand considerable and concentrated thought. And we will have to be intentionally standing on the shoulders - by that, I mean reading the books of - those who have come before. Can we be agents of reformation by thinking deeply, offering well-informed glimpses of resurrection life? . . .

If we do not ground our Christian proposals in studied conversation, shaped by habits of reading widely and deeply, we will not have substantive contributions to make, our ideas will be thin, our proposals less than adequately wise or fruitful. For the full force of resurrection power to shake the world we will need to do more than shout out the truth of the victory.  We will have to think through its implications, reading widely and deeply, unlearning and learning much, praying and working for the mind of Christ, so that we offer truly good news of healing and hope to the watching world.”

What if that newness bubbled up in our public discourse? In our economic systems? In our approaches to food and farming?

What if newness was the norm, in every corner of a groaning creation?

That’s the “what if” that energizes and intrigues me, keeps me reading, thinking, writing, and sets the agenda for my day.

Other "What if" Synchroblog posts:


Other posts on newness and resurrection:

Posted by Carol Kuniholm at 9:01 AM