The Synchroblog topic this December is “The Kingdom of God and Home":

“What does Coming Home mean to you this season? Is it practical, spiritual, emotional? What does “home” look like or feel like in the ? Do you have a “coming home” story that you’d love to tell?”

“Home” is one of those words I sometimes stumble over. I had lived more places than I know by the time I landed with my grandparents just before I turned two.  The year of ninth grade I lived in three different households, went to two different schools. My senior year of high school that pattern was repeated: a new school, three new addresses.

Between the age of twelve and twenty-eight, I lived in at least fifteen different places, sometimes for weeks or months, at most two or three years. Apartments, old-subdivided houses, dorm rooms, camp cabins, attic bedrooms with families I hardly knew. 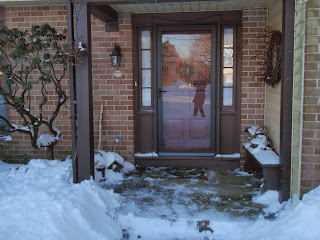 I’ve lived now in the same place for more than sixteen years. This place is a gift. This life is a gift. If I have a choice, I’ll stay right here a long, long time.

But there’s more to home than houses. More to coming home than finding a safe harbor, putting down roots, painting a room whatever color I choose.

More, even, than the great gift of a sturdy marriage, a warm and loving family, a garden I’ve tended now for a decade and a half.

I’m three weeks into my Advent observance, and this week’s passages all speak to me about this question of “home.”

Isaiah 35:1-10 sings of a time of rejoicing, when the redeemed will enter , “and those the Lord has rescued will return.” That theme continues in Psalm146, a song of praise to “the Lord, who sets the prisoner free.” And in Mary’s song in Luke 1:46-55:

He has brought down rulers from their thrones,
but has lifted up the humble.
He has filled the hungry with good things
but has sent the rich away empty.

I’m reminded, as I read these passages, that until we all have a home, we are not yet home.

A New York Times series this week featured a homeless girl, Dasani, struggling to navigate the streets of . In my own smaller world, I’m in prayer for two I love whose homes no longer feel safe, or healthy.

Recent headlines announce record numbers of homeless children in my state of . In the , the estimate is that 1.6 million school age children are homeless: living in shelters, motels, cars, campers, sleeping on the floor in someone else’s apartment.

Yes, I know some of those kids. The boy whose mother remarried and moved, leaving him to fend for himself. The kids whose mother couldn’t find a job and moved from man to man, three teenage kids in tow. The families that fell behind in the rent, couldn’t manage the heating bill, couldn’t make it on one parent’s minimum wage. The friend who perches anxiously on the edge of other people’s lives and homes, doing her best to shield her small children from evidence of addiction, violence, mental illness.

The New Testament readings for Advent Three remind us that we live between: between promise and fulfillment, between vision and reality.

A reading in James 5 urges “Be patient, then, brothers and sisters, until the Lord’s coming.” Some days patience is hard, as we seem to move backward: less generous, less compassionate. Less funds for the education that might offer a door of escape. Tighter, harsher rules on everything from medical assistance to funding for food to support of mental health.

The final Advent Three reading, Matthew 11:2-11, has always troubled me: John the Baptist, imprisoned and soon to be beheaded, sends word to Jesus: "Are you the one who is to come, or should we expect someone else?”

I understand John’s question: Where is this kingdom we’ve been promised? Why is Herod still in control? Why am I in prison, when I’ve been faithful to my calling? Why does it look like nothing's changed?

Jesus replied, “Go back and report to John what you hear and see: The blind receive sight, the lame walk, those who have leprosy are cleansed, the deaf hear, the dead are raised, and the good news is proclaimed to the poor. Blessed is anyone who does not stumble on account of me.”

What does Jesus mean when he says “Blessed is anyone who does not stumble on account of me”?

It's comforting to see that there’s no reproach in his answer to his cousin John. He concludes, “Truly I tell you, among those born of women there has not risen anyone greater than John the Baptist; yet whoever is least in the kingdom of heaven is greater than he.” 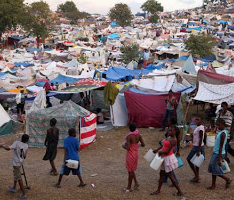 And what does that last statement mean? “Whoever is least in the kingdom is greater than he.”

Some days I tire of mysteries. I want those straight paths right about now. Streams in the desert, homes for those without them.

But there’s even more to this question of home than the injustice and loss I am helpless to repair.

As a teen on the edge of homelessness, I listened often to the , Stills, Nash and Young song: “Our House”:

Our house is a very, very, very fine house
With two cats in the yard, life used to be so hard
Now everything is easy, 'cause of you.

The song described an idyllic moment in the affair between Graham Nash and Joni Mitchell, and captured the hope so many of us have in a house and life where everything is easy.

But that moment in their lives didn’t last, and as I’ve learned, the dream is illusory.

In the Problem of Pain, C. S. Lewis wrote:

The settled happiness and security which we all desire, God withholds from us by the very nature of the world: but joy, pleasure, and merriment, He has scattered broadcast. We are never safe, but we have plenty of fun and some ecstasy. It is not hard to see why. The security we crave would teach us to rest our hearts in this world and pose an obstacle to our return to God: a few moments of happy love, a landscape, a symphony, a merry meeting with our friends, a bathe or a football match, have no such tendency. Our Father refreshes us on the journey with some pleasant inns, but will not encourage us to mistake them for home.

Returning to this theme of “home” in a sermon not long after, Lewis spoke of “ this desire for our own faroff country.” He described the “inconsolable secret,” the haunting longing, that we sometimes call beauty, or nostalgia:

These things—the beauty, the memory of our own past—are good images of what we really desire; but if they are mistaken for the thing itself they turn into dumb idols, breaking the hearts of their worshippers. For they are not the thing itself; they are only the scent of a flower we have not found, the echo of a tune we have not heard, news from a country we have never yet visited.

That longing doesn’t go away. In fact, the more certain I am of what it calls us to, the more deeply I long for and confidently live toward that faroff country and home I’ve never visited, where every child is wanted and every person finds a home.

We come at last to the dark
and enter in. . . We come
to the space between ourselves,
the narrow doorway, and pass through
into the land of the wholly loved.
(Wendell Berry, Given, Sabbath Poems, 2002)


Other Synchroblog posts on this topic:


Other Advent posts on this blog: