The Synchroblog topic this month is “looking back”:

In many ways I had a wonderful year: two weeks in , interesting opportunities, fun times with family and friends.

But what strikes me, looking back, is a sense of something gone terribly wrong.

Maybe it’s that the topic comes as I was considering an exploration of race, gender, power and privilege in preparation for Martin Luther King’s birthday and then the bacchanalia of Super Bowl Sunday. Looking back, I see the faces of Trayvon Martin, Michael Brown, Tamir Rice and Eric Garner, and troubling collages of other faces: unarmed men, women, children, victims of unnecessary deadly force.

But maybe it’s the intersection of tragic violence in and preparation here at home for the trial of marathon bomber, Dzhokhar Tsarnaev, and grief at the way these sad occasions turn ugly for so many peaceful Muslims.

Or it’s the conversation at a meeting yesterday morning about how tragically off-course our criminal justice system is, and the attendant reflection on the years, dollars, lives wasted by corrupt politicians and greedy enterprise.

Or puzzling and praying about a conversation days before with a Christian from elsewhere who raised this difficult question: Why are so many American Christians willing to listen and assent to ideas that sound more like Hitler than Christ?

And the way that conversation reminded me of others: Why do so many churches seem to pride themselves on how they exclude others? Why are so many Christians impervious to the failure of compassion in so many of our current systems?

So many young adults who have walked away from the church completely.

So many older adults who, when facing a choice between compassion and church, have decided on compassion.

Where did that choice come from? We live in strange and difficult times.

Phyllis Tickle, founding editor of the religion department of Publisher’s Weekly and prolific writer on church history and spiritual formation, summarized her book “The Great Emergence” at the last National Youth Worker Convention I attended, in in 2007. Her thesis was that Christianity has experienced a dramatic paradigm shift every 500 years. Each shift has been presaged by a century or more of dissonance, turmoil, a sense of unraveling, before something new and different has emerged, bringing new leadership, new structures, and a period of relative stability.

In her book, she describes each shift as "a giant rummage sale, shattering the empowered structures of institutionalized Christianity," with three attendant results: a revitalized understanding of Christian faith, emergence of a new, less ossified version of the Christian church, and a new, more lively witness to those alienated by earlier expressions.

It’s a tidy theory: the fall of around 500 A.D., with Gregory the Great and the monastics stepping in to offer leadership as authority structures shifted. The Great Schism of 1054 AD, as the Roman Catholic and divided. The Reformation, marked by Luther’s posting his 95 ideals on the door of in 1517 A.D.

According to Tickle, we are now in the middle of what she’s named The Great Emergence.

"Like every 'new season,' this one we recognize as the Great Emergence affects every part of our lives... and is the context for everything we do socially, culturally, intellectually, politically, economically."

According to Tickle, things have been shifting for decades, with questions about authority, epistemology, order. In her book, she describes 60 percent of current Christians as “emerging”: moving toward the center, losing confidence in the divisions. 30 percent fall into the oval categories, designating movement toward the middle: “hyphenateds” (“Presby-mergents, “Metho-mergents,”), “progressives,” re-traditionalists,” “traditionalists.”

The remaining 10 percent Tickle describes as staunchly stuck in the far edges of their categories, “reactionaries” who act as “ballast” in the rough seas of change.

It’s an interesting framework, one I’ve carried with me.

I’ve also carried with me her words at the conclusion of her talk, but I hadn’t really understood them until very recently.

She talked about the accusations and disruption that have accompanied times of change.  Inquisitions, beheadings, violence and horror from challenged religious powers.

Whenever there is so cataclysmic a break as is the rupture between modernity and postmodernity… there is inevitably a backlash.  Dramatic change is perceived as a threat to the status quo, primarily because it is.

She ended with a warning so sharply stated I’ve remember it almost word for word: “If you leave here and you don’t do ministry on your knees, in constant prayer, you haven’t heard a word I’m saying.”

I heard her, but didn’t understand: what we’re seeing, in immigration, economics, church governance, a host of other troubling issues, is a paradigm shift, a battle for authority and power. And we’re nowhere near done.

Tickle, now 80, raised concern and questions after comments at the close of a conference in her honor in 2013, when she seemed to blame women for disrupting families and unsettling the forms of faith.

And her books, The Great Emergence – How Christianity isChanging and Why (Baker Books, 2008) and Emergence Christianity – What It Is,Where It Is Going, and Why It Matters (Baker Books, 2012) have been targets for endless discussion about the term “emergent” and “emergence”, debate about specifics of Tickle’s analysis, arguments about whether the “emergent church” does or doesn’t adequately portray the new paradigm Tickle predicts. 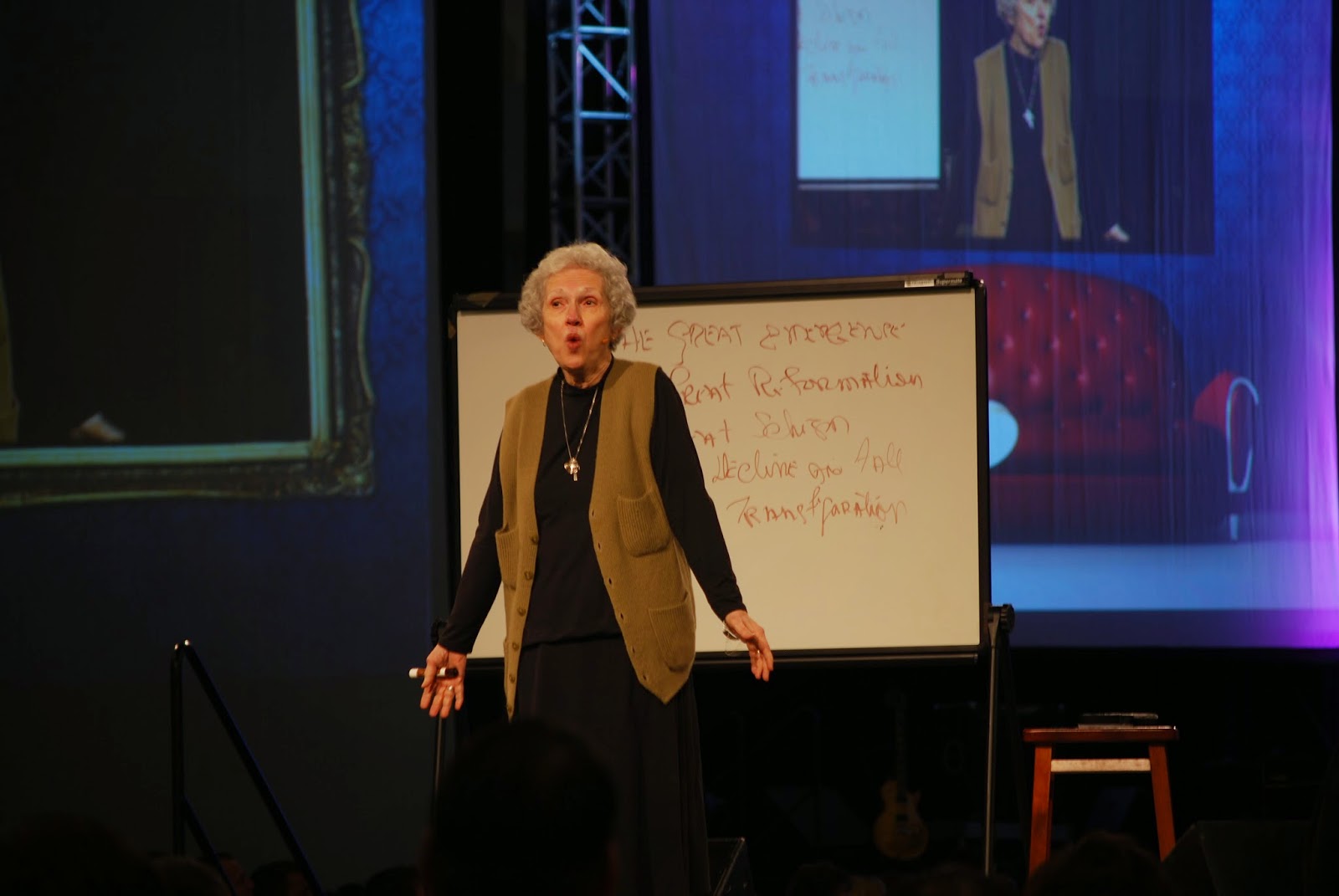 What I CAN say is this: we are currently caught in powerful cross-currents of fear and hunger for power.

Those who have power are fearful of losing it.

Those who long for stability are fearful of what comes next.

New voices still waiting to be heard are fearful they’ll be closed out again, whatever new forms emerge.

We find ourselves caught between nostalgia and anger.

Between a vehement, often volatile insistence on conformity to old structures, and a dangerous, disruptive freedom with no boundaries in sight.

I don’t agree with everything Phyllis Tickle has said, in books, speeches, other forms.

But I do agree with this: we are living in a time when paradigms are shifting, violent backlash is possible, and prayer is essential.

It’s a time when we would do well to read and reread the Gospels, reminding ourselves of Jesus, how he spoke to power, how he loved the powerless, how he turned the other cheek.

There are voices we have yet to hear.

We have logs in our eyes.

And miles to go before we sleep.

This is part of the January Synchroblog, Looking Back. Links to other Synchroblog posts:

Please join the conversation. Your thoughts and experiences in this are welcome.Look for the "__ comments" link below to leave your comments.
Posted by Carol Kuniholm at 10:05 AM