Yesterday was National Daughters’ Day. One of the great gifts in my life has been my two wonderful, thoughtful daughters, and my granddaughter, a joy and delight just as her mother and aunt have been.
But the day reminds me of other daughters in the faith, young women God has graciously put in my life to teach me and challenge me and remind me that simple answers are rarely the right ones, and grace is a gift that flows in every direction.
Yesterday was also the day President Trump announced his third selection for Supreme Court judge, while Ruth Bader Ginsburg still awaits burial. The rancor and division grow deeper as precedent is ignored, previous statements about appropriate timing are forgotten, and the court becomes ever more a tool of party politics. 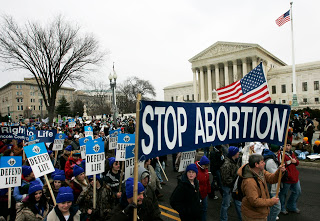 I wrote in 2012 about my experience as a young mom, marching in pro-life marches as part of a group called NOEL: National Organization of Episcopalians for Life. I wrote then:

For me, this is a topic where justice, mercy, and humility collide, and I find myself grieving, repenting, and wishing I lived in a time that allowed sackcloth and ashes. I’d go find some.

Here’s what I grieve:

Since then, I’ve watched my people, white Evangelical Christians, put their trust in a man who has boasted about forced sexual encounters, whose close friends exploited underage women for the benefit of wealthy, powerful men, a man who mocks the disabled and calls fallen soldiers "losers."
In ministry I often referred to a passage in 2 Chronicles 20, where King Jehoshaphat showed great wisdom as he put his trust in God’s provision. Lately I’ve been musing on the end of that story, where Jehoshaphat put his trust in an unholy alliance, rather than God himself:

Later, Jehoshaphat king of Judah made an alliance with Ahaziah king of Israel, whose ways were wicked. He agreed with him to construct a fleet of trading ships. After these were built at Ezion Geber, Eliezer son of Dodavahu of Mareshah prophesied against Jehoshaphat, saying, “Because you have made an alliance with Ahaziah, the LORD will destroy what you have made.” The ships were wrecked and were not able to set sail to trade.

In the evangelical alliance with Donald Trump and the harsher side of the GOP, evangelical churches are destroying their witness and demonstrating a tragic lack of trust in God and lack of understanding of who he calls us to be.
I’ve argued elsewhere that Trump’s ways are wicked. The evidence now is far greater than what I knew in 2016, when I wrote about his recurrent pattern of fraud and mistreatment of women. Since then he has manipulated every institution he can reach to his own profit and political ends, sowing seeds of doubt in our elections, our postal service, our courts, our medical professsionals.
If the goal is to preserve life, we need to ask:
If the goal is to see fewer abortions, there are better ways to get there than packing the court with partisan judges. I continue to wonder why those who claim to be pro-life are not more eager to ensure policies that would make parenthood more possible. There are plenty who have written about this in more detail than space allows.

What many pro-life Christian also don’t know is that abortion rates in the United States have been dropping and are now at pre-Roe v Wade levels. Some would like to claim that abortion rates are dropping because of the restrictive laws that have been put in place that have closed abortion clinics or otherwise made it more difficult for women to get abortion. But the facts don’t support that claim.

States where abortions are easily available have seen abortion rates fall as much or more. One report observes, “Five of the six states with the biggest declines – Hawaii at 30 percent, New Mexico at 24 percent, Nevada and Rhode Island at 22 percent, Connecticut at 21 percent – have passed no recent laws to restrict abortion clinics or providers.” Further, other developed nations have seen abortion rates drop without laws that have restricted abortion.

Those of us who oppose abortion have a responsibility to be honest about what does and doesn’t work. Something besides a desire to protect unborn life is at work if most of the anti-abortion efforts are dedicated to pushing an approach that has not been shown to be consistently effective. The desire to control and punish women seems to be over-riding the desire to reduce abortions. This is deeply misguided.

So what works? Essentially, it comes down to three things: (1) easy access to cheap or free contraceptive, (2) sex education which includes information about how to correctly use contraceptives, and (3) a strong social safety net. 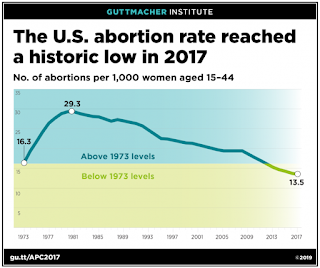 That safety net would include paid family leave, affordable child care, affordable housing. I’m offended by anyone who claims to be pro-life and opposes policies that make it easier to care for children.

I know women whose lives have been shattered by abortion.

And I know teen girls burdened with care for small lives when they weren’t ready to manage their own, young women whose futures were shattered by circumstances far beyond their control, women who found themselves drowning with guilt and regret and judgement from all sides.

I think of the verse from Isaiah that says “a bruised reed he will not break.”

I think of the way he called the women around him – older, younger, clean, “unclean”: daughter.
And I think of his words for the Pharisees eager to be right but lacking in love and mercy:

do not do what they do, for they do not practice what they preach. They tie up heavy, cumbersome loads and put them on other people’s shoulders, but they themselves are not willing to lift a finger to move them.
The load of an unwanted pregnancy is a heavy one.
Strange that the people most likely to impose that on women they don’t know have been most vocal in refusing to wear masks to protect the lives of those they do know.

Our policy needs to be shaped by both: love of life. Lives of love.

If you listen to podcasts, here’s one to consider: Freedom Road Podcast: It's time to talk about abortion and reproductive justice. I love a concluding comment from Susan Chorley, an ordained American Baptist minister and director of an after-abortion counseling hotline:

I think my prayer and what I have continued to uncover and recover is that the love of Jesus is big enough. And any of these limits that we’re trying to place on Jesus’s love are false. And it’s a real opportunity and actually a revival of the Christian community to trust in the abundance and never-ending love of Jesus.

We need far more of Jesus and his unfailing love.

Are there other Christians speaking out against a one-issue embrace of Donald Trump's presidency? There are many. If you need more, let me know.

Liberty professor Karen Swallow asks Must Pro-llfe mean Pro-Trump? We have placed too much faith in the political calculus and not enough faith in God’s power.  At what point do our actions imply that God wants us to do wrong because he needs us to help him do right?

Mother of six Jennifer Abel describes The Heavy Weight of Disillusionment and asks her fellow Christians: Why are you so willing to turn a blind eye to so many behaviors that are completely, blatantly in opposition to the heart and character of Christ?

Pro-life conservative columnist Mona Charen: Why this Pro-Live Conservative Is Voting for Biden: Being pro-life is part of an overall approach to ethical questions. It’s wrong to take innocent life. But other things are immoral too. It’s also wrong to swindle people, to degrade and demonize, to incite violence, to bully, and while we’re at it, to steal, to bear false witness, to commit adultery, and to covet. . . Donald Trump is a daily, even hourly, assault on the very idea of morality, even as he obliterates truth. His influence is like sulphuric acid on our civic bonds. His cruelty is contagious.

Conservative columnist David French asks Do Pro-Lifers Who Reject Trump Have ‘Blood on their Hands’? Short answer: no. The long answer: 1. Presidents have been irrelevant to the abortion rate; 2. Judges have been forces of stability, not change, in abortion law; 3. State legislatures have had more influence on abortion than Congress; 4. Even if Roe is overturned, abortion will be mostly unchanged in the U.S.; and 5. The pro-life movement has an enormous cultural advantage.

From Christianity Today: On the Front Lines, Some Pro-Life Activists Think Twice About Supporting Trump.

A foster and adoptive parent speaks on behalf of unwanted children: Pro-life should be more than pro-birth.

Church of the Redeemer pastor Tim Keller Encourages Christians to Vote Their Conscience, Stop Demonizing Other Political Parties: “The Bible binds my conscience to care for the poor, but it does not tell me the best practical way to do it.” “The Bible tells me that abortion is a sin and great evil, but it doesn’t tell me the best way to decrease or end abortion in this country, nor which policies are most effective.

Posted by Carol Kuniholm at 6:02 PM