There was a church in , Little Portion,
Already old eight hundred years ago.
It was abandoned and in disrepair
But it was called St. Mary of the Angels
For it was known to be the haunt of angels,
Often at night the country people
Could hear them singing there.

What was it like, to listen to the angels,
To hear those mountain-fresh, those simple voices
Poured out on the bare stones of Little Portion
In hymns of joy?
No one has told us.
Perhaps it needs another language
That we have still to learn,
An altogether different language.

On Pentecost morning, I found myself at breakfast at Le Rimlishof, a retreat and meeting center owned by the French Scripture Union counterpart, Ligue pour la Lecture de la Bible.

There were five of us around the table – from five different countries: , , , , and the . The conversation turned easily to Pentecost, to language, and to the challenges of Bible translation when the history and use of a word can alter its meaning, when many in the world speak a language that has no written history, when putting a word into writing can be a political act with layers of meaning no one can foresee.

Listening to my international friends talking, it occurred to me that Christians from the are at a sharp disadvantage in our understanding of language and of scripture, even as we enjoy a luxury few in the world have: we are surrounded by people who speak our language, and we are taught a written tradition centuries deep, with no need to wrestle with translation of complex ideas. As a result, we are not confronted, as so many others are, by the difficulties of nuance, the intricacies of connotation and denotation. We have no need to live across linguistic divides, as do the German Swiss working alongside the French Swiss, the Tamil Sri Lankans living beside the Sinhalese. In our simple understanding of language, we’ve come to believe that translation is a straightforward transaction: each word has a meaning that can be exchanged for an equal word with identical meaning, with no loss of understanding, no muddying of intent.

For those who speak multiple languages, that belief is amusing, child-like, even dangerous.

We spent four days at Le Rimlishof. While the Scripture Union staffers spent their days in meetings, looking for ways to work across cultural and language divides in engaging people around the world in reading the Bible, I wandered the beautiful , taking photos of the neat kitchen gardens, enjoying unfamiliar birdsong, sampling pain de chocolate from the two small bakeries in the village center.

Rejoining the group for meals, I’d ask for clarification and correction from the German and French Swiss representatives. What is “swartzwurzel”? Black root, poor man’s asparagus, winter asparagus. A perennial root-crop. Peel it, boil it, and use it as you would asparagus.

That one was not so easy. It’s the same root as collar: something to do with the neck. But as a place? It’s the low part between two mountains. My translators struggled to find the right word.

But then, there was a moment of consideration by my translators, as they considered other meanings of the word, turned slightly red, and said “well, it also is used in other ways.” 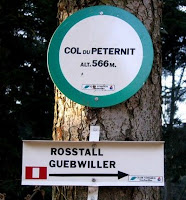 Inappropriate, somewhat rude ways, apparently. They were warning me to be careful in the use of the simple word “col,” but hoped to leave it at that.

“So the signs are pointing toward passes between mountains, but better not to use the word.”

They nodded and smiled. Disaster averted.

Later that morning I found myself sharing my binoculars and camera with a small troupe of children. Le Rimlishof hosts school children for environmental exploration during the week, then church groups for retreats on weekends. While we were there, a large group of French school children spent time running up and down the side of the mountain, then an energetic German church arrived for campfires, cookouts, and lots of intergenerational play.

A smaller group of children and adults stay on through all the program changes: a handful of refugee families, some from Kosovo, the others, I think, from . Maki, Makfirete and Jojo were interested in my binoculars, so I showed them how to use them then took their picture and shared it with them on my digital camera. That led to more photos, some energetic jumping from rocks, and numerous attempts to communicate. When I tried to speak French to them, Makfirete, a sturdy girl of seven or eight, said “No English!” When I tried to say I was speaking French, she shrugged and said again “No English!”

We did manage to count to ten together – badly, since Jojo and Maki are still at the age when seven can easily follow five, and my pronunciation of “quatre” and “cinque” left Makfirete shaking her head. While we were counting, laughing, and documenting their amazing jumps, a German couple came up the drive in search of a nearby address. They didn’t speak English, the children couldn’t understand their question in German, and their mothers, when coaxed from the nearby kitchen, made clear that they spoke neither French, English, or German.

What a wonder it must have been, on that Pentecost day two thousand years ago, for the disciples to speak and find that those around them understood. And to know that the meaning was intact – to know that the Spirit, in guiding the language, was speaking straight to the hearts of the listeners.

An Adventures in Mission team a young friend took part in had a similar experience in . A team of young adults was trained to do street ministry – drama, worship, and an offer to pray for anyone in need of prayer. One of the young men of the group found himself praying in tongues in a way that seemed unfamiliar. When he finished, a man in the crowd told him he’d been speaking in that man’s language – a tribal language, one of over three-hundred languages in a country divided by mountains, deep valleys, and vast areas of jungle. The good news of Jesus took on new life, not just for the man who heard it in his language, but for all the listeners: God is near. He knows our language.

God knows our language, but do we know his?

After lunch on Pentecost Sunday, my husband and I traveled on from Le Rimlishof to , a historic town that has been the anchor of the region for centuries. According to Wikipedia, “was the location where Charles the Fat held a diet in 884.” It was an imperial city of the Holy Roman Empire, participant in the Protestant Reformation, occupied by during the Thirty Years' War, conquered by under Louis XIV in 1673, annexed by the German Empire in 1871 as a result of the Franco-Prussian War. After World War I Colmar was returned to , was occupied by Nazi Germany from 1940 to 1945, and has been French since 1945.

Wandering the narrow historic district of Colmar, we came to the Place de la Cathédrale, and headed toward the entrance of ’s, the Gothic church built in the thirteenth century over the remains of two earlier churches. We were stopped at the door by a man asking for something: “petite pence”? Our attempts to understand him, or to have him understand us, went nowhere, until we said “Etats Unis.”

“Ah!” He motioned us toward another man, sitting on the ground, who looked up at us and then spat on the ground. Meaning broke through – they were beggars, asking for change. We shook our heads and pushed through the door to find a service in progress inside the grand gothic space.

Solennité de la Pentecôte - Solemnity of Pentecost. A service of music, prayer, and eucharist totally familiar, with a reading from Acts 2, another from 1 Corinthians 12, and the repetition, together, of “Notre Père, qui êtes aux cieux, Que votre nom soit sanctifié.”

Toward the end of the service, we sang a familiar song, a song written in Latin about the time the church was built by Francis of Assisi, and set to music in in the seventeenth century:

“Alleluia,” in French, is the same as in English. In fact, it seems one of the few words that holds true across almost every language, with slight changes in spelling and pronunciation, but no change in meaning.


Amazing to think there will be a day when all languages join in song, when all creation celebrates together, when the differences of speech and culture become part of the beauty, rather than points of frustration, or dangerous division:

It's the song of the redeemed rising from the African plain.
It's the song of the forgiven drowning out the Amazon rain,
the song of Asian believers filled with God's holy fire.
It's every tribe, every tongue, every nation, a love song born of a grateful choir.
It's all God's children singing, "Glory, glory, hallelujah, He reigns. He reigns." 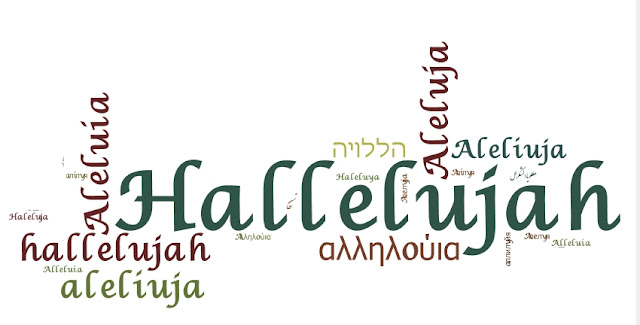 Please join the conversation. Your thoughts and experiences in this are welcome. Look for the "__ comments" link below to leave your comments.

Posted by Carol Kuniholm at 9:10 AM


The dove descending breaks the air
With flame of incandescent terror
Of which the tongues declare
The one discharge from sin and error.
The only hope, or else despair
Lies in the choice of pyre or pyre—
To be redeemed from fire by fire.