The Nightmare of Empire

Our church has been studying the last half of Genesis. My morning reading with Encounter with God this week landed in the same chapters. The title for yesterday morning's notes was ominously titled The Temptations of Empire:

As the famine continues and extends its reach across the whole region, Joseph achieves the pinnacle of his power in Egypt. He devised a system which kept mass starvation at bay, and the writer records that “he brought them through that year with food”. However, this success came at the price of the liberty of the people who were “reduced… to servitude”. The devising of an economic system which kept the population alive was a great achievement, but it resulted in a dangerous centralizing of power which, as the story of Exodus will reveal, led to oppression and slavery. 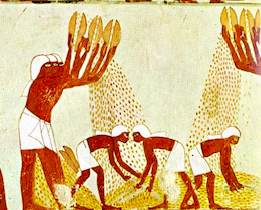 Walter Brueggamann makes this point in a sermon called "The Fourth-Generation Sell-out." He asks why, given four sets of ancestral stories in Genesis (Abraham, Isaac, Jacob, Joseph), God is spoken of repeatedly in reference to only three: “the God of Abraham, Isaac, and Jacob."

Why wouldn't Joseph, most powerful of the four, be included?

According to Brueggemann, Joseph’s name was dropped because he conducted the imperial work of Pharaoh. Given opportunity to be a blessing to the nations he became instead an agent of empire:

Joseph proceeds to do more than interpret. He advises. He is a "consultant." . . . Joseph achieves for Pharaoh, by his rapacious, ruthless wisdom, a monopoly of food that becomes for Pharaoh an economic tool and a political weapon." Joseph victimized the Egyptians and eventually his own people as well.

According to Brueggemann, "he becomes the manager and chaplain of the nightmare of empire."

We are in a nightmare of empire of our own.

Our democracy, our country, our state, our political parties are all in upheaval: all held captive by powerful men who have compromised with evil and used privilege to harm those they promised to protect.

I believe many of our leaders start out, like Joseph, determined to serve well, then fall prey to temptation.

Surrounded by privilege and power, it's so tragically easy for them to lose their way.

I met one state representative who never stays in Harrisburg because, he says, "It's too easy to be sucked in. To think it's normal to be wined and dined by lobbyists. To think it's okay to use power to maintain my own position."

I've spoken with legislators who were genuinely thankful when they lost a race for re-election: "I'm not sure I realized how dysfunctional it was until I was forced to step away." 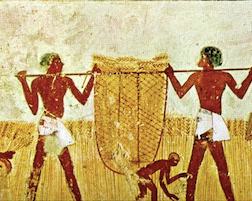 The people of Joseph's day had no choice about who ruled them.

They had no say in the way the drama played out.

Struggling to survive, they acquiesced to Pharaoh’s power and Joseph's ruthless greed.

We do have a choice.

And the moral responsibility to watch, pray, learn, speak, vote.

Our choices impact not just us but those who have far less choice: children in impoverished communities, men and women incarcerated without fair trial or reasonable bail, refugees fleeing oppressive regimes, people in nations across the globe who watch with alarm as our country careens toward war with Korea or capriciously withdraws from carefully drafted attempts to manage pressing concerns.

On a global scale, our voices are loud.

They determine what kinds of policies will move forward, what tone will govern party platforms, what kinds of leaders will be encouraged on their way.

What we repeat. Who we applaud. What we hope for. How we pray.

I pray for leaders who demonstrate humility, wisdom, courage.

I pray for Christians able to hear, discern and speak the truth.

I pray we remember the command to love our neighbor and the promise that perfect love casts out fear.

I pray for a platform of justice and mercy, a church that remembers God's heart for the poor, the defenseless, the stranger, the worker.

Move, as you moved in ancient Egyptian days.
Move the waters and the flocks and the herds
toward new statutes and regulations,
new equity and good health care,
new dignity that cannot be given on the cheap.
(From Walter Brueggemann: A Prayer of Protest, 2010)

Some earlier posts about political issues can be found here: What's Your Platform

Posted by Carol Kuniholm at 6:06 PM