As the righteous grow powerful, people rejoice; but when the wicked rule, people groan...
A king brings stability to a land by justice, but one who exacts tribute tears it down...
The righteous care about justice for the poor, but the wicked have no such concern...
Mockers stir up a city, but the wise turn away anger...
Fools give full vent to their rage, but the wise quietly hold it back...
When a ruler is listening to lies, all of his officials tend to become wicked...
(from Proverbs 29) 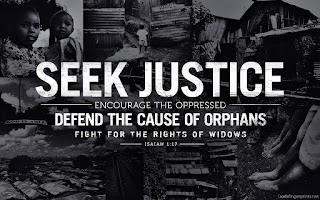 The Bible is a highly political book, with a great deal to say about goals for good governance.

Rulers and nations, according to the prophets, are inevitably judged on how well they care for widows (powerless women), orphans (children without privilege or protection), aliens (immigrants and those without legal status), prisoners (guilty or not).

By any Biblical measure, we are not doing well.

The financial inequities in our country are staggering. The US now has the greatest income inequality of any developed nation. The top .1% has a larger share of income than at any time in history - edging out the robber baron era that preceded the Great Depression. Half the US population is now considered low-income, or in poverty. 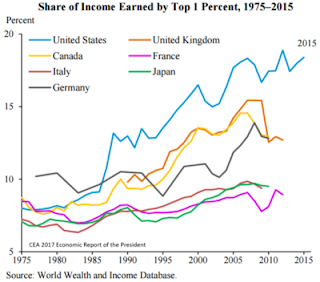 A recent headline claimed "Inequality is a bigger threat to our democracy than Putin."

Yet policies under consideration in Washington, both for tax reform and health care, would channel more money to the wealthy, with little benefit, if any, to the poor or middle class.

Racial disharmony, allegations of sexual abuse, fraud and allegations of corruption, another mass shooting, and another: these are symptoms of deep brokenness.

Confidence in our democracy is at an all-time, dangerous historic low.

Only 20% of Americans today say they can trust the government in Washington to do what is right “just about always” (4%) or “most of the time” (16%).

This week, an American Psychological Association study on stress in America found:

Nearly two-thirds of Americans (63 percent) say the future of the nation is a very or somewhat significant source of stress, slightly more than perennial stressors like money (62 percent) and work (61 percent), according to the American Psychological Association’s report, "Stress in America™: The State of Our Nation".

More than half of Americans (59 percent) said they consider this the lowest point in U.S. history that they can remember — a figure spanning every generation, including those who lived through World War II and Vietnam, the Cuban Missile Crisis and the Sept. 11 terrorist attacks.

It's a year since our last election and I still find myself grieving: when we vote, we affirm and endorse the character of the one we vote for.

Last year many of my fellow Christians chose a vision of the future tragically at odds with the kingdom of God I've been working toward since childhood.

They affirmed behavior in direct contradiction of the virtues I faithfully memorized and pray to practice: gentleness, patience, goodness, self-control.

We are living through the fruit of that election and the political climate we've been sowing: anger, division, deepening distrust, policies cut loose from any pretense of public good.

Not that the 2016 election was the cause of our downward slide, but part of a troubling narrative: Loss of discernment. Failure to engage wisely. Eagerness to place blame. Willingness to swallow simple answers. 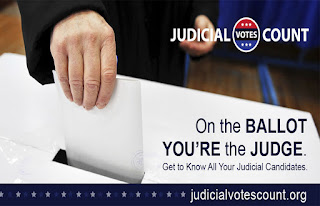 We should not be voting for judges.

We have too many races, too little information.

Even so: every judge will be deciding issues that impact our lives in ways beyond what we can see.

And every local official will set policy that will impact our communities for good or harm.

For any who claim to follow scripture, the calling seems clear, repeated in both Old and New Testaments (Isaiah 11 and Luke 4):

The Spirit of the Lord GOD is upon me,
Because the LORD has anointed me
To bring good news to the afflicted;
He has sent me to bind up the brokenhearted,
To proclaim liberty to captives
And freedom to prisoners.

We are all called to love our neighbors as ourselves: neighbors near and far, known and unknown, like and unlike.

Called to put their needs before our own, as the good Samaritan did on the dangerous road to Jericho.

And we are all called to live and work and pray toward a beloved community where slave and free, Jew and Gentile, every language, every shape, every beautiful shade of brown and beige is welcome, valued, nurtured, loved.

We are called to love rather than fear, listen rather than condemn, act as agents of reconciliation, mercy, peace and healing.

Which means we're called to pray for wisdom and discernment.
It means noticing when our news commentators' voices shift to a tone that invites hysterical response and turning them off rather than fall prey to anger and division.

It means taking time to check out outrageous stories rather than trust slick mailers or partisan propaganda.

Or choosing not to believe the bad report when we don't know for certain if it's true.

Loving our neighbor means voting for the good of those we're called to care for: widows, orphans, aliens, prisoners.

Not just myself, my family, my party, people most like me.

So I'm looking for candidates concerned about affordable housing.

Good stewardship of land and water.

Reform of our inequitable school funding and our immoral bail/bond practices.

I no longer look for candidates who say what they think one party or the other wants to hear.

I'm looking for candidates whose biographies, activities, words and tone suggest an understanding of service, of commitment, of kindness, of grace. 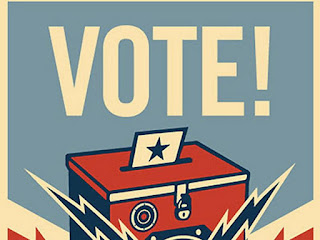 Is there any evidence that they've served the poor?

Any evidence they've made hard choices?

Any hint of wisdom or mercy?

There are people who died to give us that privilege.

And there are millions of people around the globe would give anything to have that chance.

Posted by Carol Kuniholm at 7:26 PM