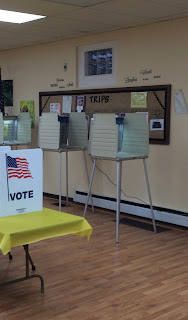 On Election Day I woke early, drove through the dark to the Senior Center in a town not far from mine and arrived at 6:05 to help prepare a polling place.

I taped signs and poster on walls and doors, moved tables and chairs, sat down for a brief review of how to use the printed poll book.

My book for the day was A to L. Somehow A to D had been printed facing one way, with E to L facing the other.

My primary task was to look up names as people gave them, ask for ID if this was their first time voting in that precinct, show people where to sign, then write a ballot number in the poll book while someone next to me recorded the same information in a little paper ledger.

The doors opened at seven with a line spilling out to the street and for several hours, each time I looked up the line seemed exactly the same.

Sometime mid-morning it slowed enough for distribution of coffee and pastries delivered by a local coffee shop.

Later, someone from the gourmet chocolate shop around the corner came in to vote,, then came back minutes later with a bag of chocolates to share.

Mid-afternoon, the line dissolved long enough for me to step out into the brilliant  afternoon and exchange greetings with the two party reps sitting opposite each other, talking amiably. 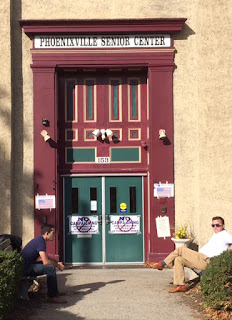 At some point a poll watcher arrived, pulled up a chair not far from me and sat down to watch. In a brief break between voters he offered an explanation for his appearance: “someone called to say they were asked for ID.”

“Half the people who come through the door are new to this precinct,” I told him. “So they need to show some kind of ID.”

“No – just something with their address.”

He sat and watched a while longer, then shrugged. “Nothing here to report,” he said as he headed toward the door.

A woman my age or a little older came in during another lull, hurrying to the table.

“My mother’s in the car,” she said, “and we’ve been driving around trying to find her polling place. She can’t remember where she’s supposed to vote and she’s adamant she has to vote in this election.”’

I looked up the name in my book and there it was.

“You’ve come to the right place.”

Eventually they came in together, the mother moving slowly with a walker, insistent on standing in line. She stared at me with a glint in her eye while I found the right page, then signed her name with a wavering script and moved off slowly to cast her vote.

They all signed their names, gleeful and proud, and moved off to collect their ballots.

At 4:30 two pizzas were delivered. They were stone cold by the time anyone had time to eat them.

At eight, the last voters finished casting their ballots, the Judge of Elections locked the front door and our little team began the complicated task of closing out the process.

We sorted out write-ins on the paper ballots, recording names (six for Bernie, three for Romney, one for John Kasich, one for Mickey Moose.)

We put tables and chairs back in their proper places so the seniors arriving in the morning would find their center undisturbed.

We pulled signs and posters off the walls, inside and out.

We posted the tally of votes in a prominent place outside the polling place and placed duplicate tallies in different envelopes to be stored in their proper places.

Sometime after ten we all signed our names attesting that we had witnessed the election carried out in a lawful manner, watched the Judge of Elections and Minority Official drive off together with the sealed bags of ballots to deliver to the county offices, then called goodnight across the darkened parking lot.

It was a long, tiring day, but it struck me as I drove through the quiet town toward home, everyone involved had been working toward the same goal: a fair election where everyone who showed up was able to vote. 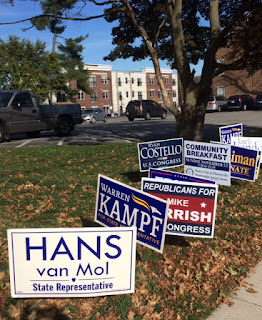 I don’t know who my fellow workers voted for.

There are inefficiencies in our election administration.

And in a polling place where many voters were new to the precinct, it was easy to see why lines are long in some places and not so long in others.

But at its core, the day reminded me of the strength of we the people, the soundness of the vision that all voices should be heard.

That vision is hard to hold.

I stayed up too late on Tuesday night, watching returns with my husband as the tide seemed to shift.

At a little after one, as the outcome became clear, we called it a night and headed off to bed.

The next morning, we carved out time to watch Hillary Clinton’s concession.

We’ve all heard of the stages of grief: denial and disbelief; anger, even rage; bargaining; sadness and depression; acceptance.

Fear that all protection is gone.

Fear that the future will be more painful than the past.

Much has been written in the past few days.

Jubilant explanations about how Trump’s miraculous success is clearly God’s will.

Exhortations to get over it and respect the will of the people.


Anguished introspection about who we’ve become and where we go from here.

For anyone paying attention, this election has made clear that our institutions are broken and “we the people” are in danger.

Our electoral system is in need of real reform. Gerrymandered districts, laws deliberately obstructing or suppressing the vote for certain populations, closed primaries where candidates are determined by just a  handful of our most partisan voters: all need to change.

While our media was busy treating the election like a reality TV show, they missed a deeper story: this was the first election in 50 years without the full protections of the Voting Rights Act. Did that affect the outcome?

How many people were turned away from the polls? How many others didn’t bother to show up in the first place? These are questions we need to take far more seriously.

The party now in control is the party most responsible for undermining the principles that safeguard democracy. Should we rejoice? Or weep?

Historically, the media has served as an alternate check and balance when government has swung out of control.

That requires a media willing to look at underlying issues and causes and a public able to discern truth from propaganda.

The checks and balances that once protected our great country from a totalitarian government are no longer methods of citizen control over Washington, D.C.

Our first line of civilized defense from tyranny was a “Free Press” along with an informed citizenry. Both have disappeared, one into political favoritism, the other into low-information dummy-downed “victimized” voters.

In America, our churches have been essential, even primary guardians of democracy. The idea of “we the people” was born from the Biblical insistence that all are of value in God’s eyes, that all deserve equal treatment under the law, that all are called to work together for the common good.

Churches played a part in the forming of the nation and historically spoke out as agents of justice. Abolitionists, advocates for women’s rights, leaders in the civil rights movement: all were nurtured, encouraged, protected and resourced by local churches and networks of churches.

For me, that’s the deepest grief in this election cycle. 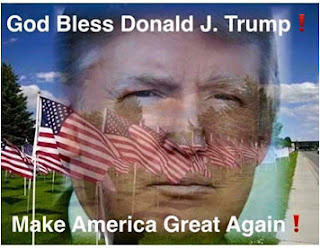 Instead of providing space for real dialogue about how to care for unwanted children, how to nurture families in poverty, how to wisely embrace suffering refugees, how to use resources wisely while caring for creation, too many churches and Christian institutions have become echo chambers for misinformation and breeding grounds for bigotry.

Some evangelicals offered “biblical” justification for voting Trump and minimized his character flaws. Others endorsed and vigorously campaigned for him. With last night’s election result, the GOP stranglehold on evangelical conscience and voting may have tightened to unbreakable strength.

A good number of people outside the faith look at the exit polls aghast and angry. Aghast because they themselves cannot imagine supporting a candidate with the personal moral flaws of Mr. Trump. Angry because they’ve watched evangelicals moralize in public for a long time, often shaming people for their sins and moral weaknesses. . . . For many, Christ and the gospel are now bound up—rightly or wrongly—with evangelicals choosing a man with little resemblance to either.

We all have work to do.

If you believe I’m wrong and you're celebrating your candidate's win, your work is this: seek to understand.

You’ve had your chance to make your point. Now give others space to grieve while you do what you can to care for those who feel defeated and unsafe. Here are two places to start: "I want to help you understand my lament"  and "Postelection Reflection: Ears to hear and the courage to respond."

If you believe I’m right, join me in prayer about how to heal these broken institutions. Change will not come from existing leadership – not in government, media, churches.

But beyond institutions, we need to ask again, more deeply, more courageously: what does it mean to love our neighbors as ourselves?

How will we declare God’s compassion and justice in a world where even the term “Christian” has become linked to endorsement by the KKK? How will we ensure that all have room to thrive when religious patriarchy is now so explicitly bound to assault and defamation of women?

I have no answers, but I know the starting place.

Now, more than ever,  we need to memorize and pray and live words like these from Zechariah:

This is what the Lord Almighty says: Administer true justice; show mercy and compassion to one another. Do not oppress the widow or the fatherless, the alien or the poor. In your hearts do not think evil of each other.

Lord let that be so.

This is the conclusion of a series about faith and politics: What's Your Platform?
I invite your comment, but even more, if there are things you've been reading that suggest a way forward or offer analysis of the brokenness I describe, please share them. This conversation is not over.

Posted by Carol Kuniholm at 5:10 PM