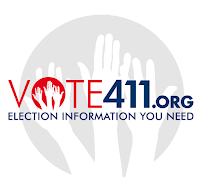 I’ve been helping publicize Vote411, an online voter education tool provided by the League of Women Voters in many states, including Pennsylvania.

This will be the first general election with statewide Vote411. PA has the largest state legislature in the country and one of the most convoluted and layered governments, with school districts twisting in and out of townships, state senate districts weaving in and out of counties. Finding information about the ballot has always been difficult. Learning about down-ballot candidates has been nearly impossible.

Vote411 makes it easier: go to the website, enter your address, then click on the green bar that says "Get personalized information on candidates and issues."

You'll get a personalized ballot with a list of races.  Click on any of those and you’ll see the candidates for office. If they’ve responded (and far more than half have done so) you can see links to their campaign websites, brief bios plus answers to three questions we asked them to answer. For races with more than two candidates, choose two to compare.

In addition to the presidential race, my ballot will include candidates for congressional representative, state attorney general, auditor general and treasurer, plus state senator and representative.

Two of those positions, state attorney general and state treasurer, are open because both incumbents resigned in disgrace mid-term.

Former Attorney General Kathleen Kane was elected in 2012 and quickly found herself embroiled in controversy about lewd and racist emails exchanged between prosecutors and judges, an investigation shut down for political purposes, information leaked from a grand jury investigation. She will be sentenced Monday for perjury and criminal conspiracy and could face up to 14 years in prison.

Ex-treasurer Rob McCord resigned in early 2015 as he pled guilty to two charges of extortion. In his 2014 run for governor, he demanded campaign contributions from two firms with large contracts with the state, letting them know that if they didn’t support him, they’d lose the contracts. While the charges each carry a potential 20 years in prison and $250,000 fine, he has yet to be sentenced. Some sources suggest an ongoing bribery investigation of at least one firm involved.

Both are Democrats but read through the Wikipedia list of federal politicians convicted of crime and set aside any illusion that one party is cleaner than the other.

Many in Pennsylvania, many across the country, prefer to vote straight party ticket. It’s certainly easier than trying to assess candidates.

And many are arguing, especially in this election, that the party platform matters more than the person or the individual candidate’s own reputation, experience or positions.

That’s the argument being put forward by Republicans called to question for support of Donald Trump. You may not like him as a candidate, but vote the platform.

The Democratic and Republican party platforms are as different as night and day, in my opinion, as far apart as evil vs. good. The 51-page Democratic platform is the most leftist ever. (I don't care for the "right vs. left" nomenclature. I am far more concerned with "right vs. wrong.") The Democratic platform contains many points which are anti-biblical. . . .The 54-page GOP platform is one of the strongest GOP platforms ever. A biblically alert person could be comfortable with almost all of it.

Set aside if you can the strange idea that experience and character don’t matter for any position that requires a high level of public trust and ability to listen, negotiate and lead. 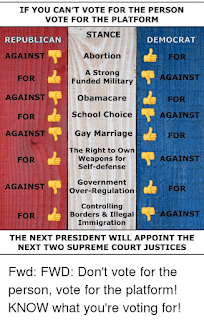 I confess, I can’t set that aside.

But focus for a minute on the claim that one party’s platform is “anti-biblical” or "evil" while the other is  “right” or "good."

I consider myself a “biblically alert person” and I’ve read both platforms – start to finish.

Give it a try:

There are parts of both platforms I agree with.

Parts of both that make me wince.

Parts of both that misrepresent the other side.

Parts of both that stake out extreme positions antithetical to common sense, common good and constitutional precedent.

If I had to put percentages on those parts I’d have to say the Democratic platform, on the whole, is more honest, more charitable and more likely to accomplish the goals we all share: healthy families, safe country, an economy that provides adequate health care, good schools and decent jobs for all who want them.

I spent some time looking for a simple chart that would illuminate difference between the parties and finally gave up. The issues of concern to me don’t always make it onto charts.

And simplification of party stances inevitably misrepresents them.

Yes, Republicans want to build a wall. No, Democrats are not for “unprotected borders.”

Yes, Republicans want religious marriage norms enforced. Democrats disagree, but they're not "against" religion, not trying to silence Christian witness or close down churches. Here's what the platform says (in part) about "Faith and Service" (19):

Democrats know that our nation, our communities, and our lives are made vastly stronger and richer by faith in many forms and the countless acts of justice, mercy, and tolerance it inspires. We believe in lifting up and valuing the good work of people of faith and religious organizations and finding ways to support that work where possible.

I could go on: about environmental regulation, trade, health care for women, effective school policy, the role of unions.

Abortion and contraception: I had planned a new post on abortion, but saw two that said everything I wanted to say and more: one by Rachel Held Evans on a pro-life rationale for voting for Hillary Clinton; the other, by Rachel Marie Stone, on "the birth control argument we shouldn't be having."

Both make the point that there are far better ways to prevent abortion than through punitive laws or a politicized Supreme Court. Honest sex education, accessible, affordable contraception and policies that improve the lives of working mothers all do far more to reduce abortion than passing laws or calling women “baby killers.”

The Affordable Care Act, which mandated coverage of contraceptives and made health care more accessible, has sent abortion rates to the lowest since Roe v. Wade.

It would be healthy and helpful to have real dialogue about the party platforms, the world views they represent and the best way to move toward solutions that work for all of us.

And won’t so long as both sides view themselves as sole owners of truth and right.

Which brings me back to individual candidate and their own stated positions.

Some candidates see beyond the simplistic “we’re right, they’re wrong” approach and exhibit exemplary wisdom and courage in how they describe real problems and offer informed decisions.

I know a few of them. They aren’t on my ballot.

My current state representative is an example. A major high-pressure pipeline has been imposed on our county, our township, our neighborhood, without due process, without real recourse. Our representative is silent. Her party gave the state away to the shale gas industry years ago and any word of objection is forbidden. I've voted for her in the past. This year? I'm considering other options.

Another candidate on the ballot has happily endorsed his party’s unconstitutional attempts to obstruct voting rights and has cheerfully helped push back regulations designed to protect Pennsylvania’s water and air. As attorney general, would he protect the rights of citizens? Unlikely.

I will not be voting either party platform this election.

Instead, I’ll be doing the hard, time consuming work of being an informed, attentive citizen.

I’ll learn what I can about the character of candidates and where they stand on positions I care about.

I’ll start with Vote411, then spend time on the candidates’ own websites.

If they haven’t bothered to tell me what they think, I’ll likely cross them off my list.

If I’m still not sure, I’ll look for articles, interviews or debates to get a broader feel for background and motivation.

I'll also check in with On the Issues, which catalogs votes and statements made by presidential and congressional candidates.

In situations where I find both candidates equally weak, but not totally unacceptable, I’ll vote against the gerrymandered expectation.  In other words: since the district lines were drawn to ensure an easy win for my incumbent Republicans, I’ll vote Democrat in protest.

In situations where both major party candidates are equally objectionable, I’ll vote third party, as a statement against the lack of honest choice.

Sometimes I vote for women and minority candidates – just because so many vote against them, every time.

What I won’t do is believe the lies that abound in every election cycle, but much much more in this one.

There are as many flying around us as leaves sailing through my yard, burying everything under their weight.

There are ways to find the truth.

factcheck.org, politifact.com and snopes.com are three nonpartisan sites I'm finding helpful in untangling, debunking and confirming stories I come across. . . .

Of course, even these resources, which I've seen point out false information on both sides, have been accused of being biased. But accusations of bias in the media don't let us off the hook. We can't just say, "news sources are biased," and use that as justification for picking and choosing whatever stories back up our preconceived ideas. This means not just getting our news from one source but cross-checking what we read or hear with multiple resources. It means being very cautious when it comes to sources of information on the fringe that might not be subject to the same scrutiny as mainstream news sources. It means questioning our knee-jerk reactions and challenging ourselves to dig deeper in trying to understand the dynamics at play. And it means doing some honest soul-searching so we can make a decision we won't be ashamed of in the future. 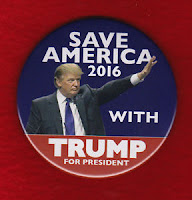 I’ve had friends and family ask me to watch and read sources that have obvious, flagrant lies.

If you’re not sure it’s true, don’t repeat it.

And don’t try to scare me: the sky is not falling.

There is one Savior and I promise you: he doesn’t bully, demean, or lie to get his way.

As do candidates and character.

Maybe not so much.

Posted by Carol Kuniholm at 8:07 PM