Who is in charge?
Who gets to call the shots?
Whose rules will we play by?
What happens when we don’t agree?

Questions of power, hierarchy, authority, coercion seem to be surfacing in every direction. This blog is part of the March synchroblog: “All About Eve.” As the synchroblog invitation suggests, “It’s Women’s History month and International Women’s Day is March 8. Women’s rights have been all over the news recently, from bills in Congress and state representative bodies to crass “jokes” by national broadcasters. The idea that women are or should be equal to men has become a polarizing topic of discussion on the national stage.”

For me, Lent is bracketed by considerations of power. During Lent we look back to Jesus’ time of solitude in the desert, and the temptations he faced as he prepared for his years of teaching and healing. Offered all the authority and splendor of the kingdoms of the world, Jesus answered “It is written, Worship the Lord your God and serve him only.” (Luke 4)

At the end of Lent, we remember Jesus’ applauded entry into Jerusalem, and the eagerness of the crowd to make him king. His refusal to embrace earthly power fed the disillusionment that led to Judas’ betrayal, and the crowds’ determination to see him crucified.

When Jesus’ followers asked about power and reward, he reminded them that the first would be last, and offered them a cross. Before his own last meal with them, he picked up the bowl and towel and washed their feet, the act of a servant or slave. So much for power.

Michelle Bachman caught headlines with conversation about wives submitting to their husbands. I found myself wondering what she meant by the word. Was she willing to submit to President Obama’s leadership in the same way she said she submits to her husband?

Mark Driscoll, pastor of a church often in the news, and author of a recent much-discussed book, Real Marriage, talks about submission: his wife’s submission to him. Does he submit to her in the same way? Who are the church leaders, the political leaders, that he offers the same submission?

When I read the passages using the word hupotassō, I find myself wondering if submission is really the best translation. More and more I find our understanding skewed by flattened, or slightly off-target, translations. Are we sure we understand what’s meant?

The original word was often used in a military context, and meant "to arrange [troop divisions] in a military fashion under the command of a leader". In non-military use, it was "a voluntary attitude of giving in, cooperating, assuming responsibility, and carrying a burden,” or “identifying with and supporting.”

As I was puzzling over this, my mother-in-law called me to ask my help in something. As we talked, she described a group she’s gathered to pray for my husband in his current travels: “like the Roman soldiers, who linked shields when they went into battle.” 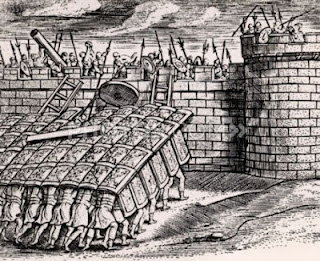 I had heard that before, but forgotten: Roman soldiers at the time of the early church were legendary for their formations. Sometimes their shields were linked together and they moved as a tightly choreographed phalanx, a single entity.

Is it possible that hupotassō is another way of asking us to live out what Jesus, Paul, Peter, John said over and over? We’re one body, part of each other, connected to each other. We’re made to serve each other, protect each other, carry each other’s burdens. Is hupotassō a practical expression of that, living in cooperation and coordination with each other, rather than as independent agents only concerned for ourselves?

Jesus is our example in this. His mission was us. His burden was us. He was so aligned with his father that his actions reflected their shared intent. He was so concerned for us that he took on our guilt, our own sense of separation. He asked us to be united with him, and with each other, in the same way that he was united with his father, serving the same goals, sharing the same vision.

If you read 1 Peter straight through – not breaking it into chapters, or little headlined sections, you’ll see one central theme emerge: we’re called from our isolated, individual lives into something new. We’re living stones in a spiritual house, “a chosen people, a royal priesthood, a holy nation . . .Once you were not a people, but now you are the people of God.”

Part of that is living in hupotassō with each other – old, young, male, female, slave, free, aligning ourselves to serve each others’ needs. In the middle of the examples, Peter offers Jesus as the prime example:


“Christ suffered for you, leaving you an example, that you should follow in his steps. . . When they hurled their insults at him, he did not retaliate; when he suffered, he made no threats. Instead, he entrusted himself to him who judges justly. ‘He himself bore our sins’ in his body on the cross, so that we might die to sins and live for righteousness; ‘by his wounds you have been healed.’”

In this way, Peter goes on, wives are encouraged to hupotassō husbands. In this way, husbands are encouaraged to live with their wives in an loving, understanding way.

The bottom line, for all of us:


“love each other deeply, because love covers over a multitude of sins. Offer hospitality to one another without grumbling. Use whatever gift you have received to serve others, as faithful stewards of God’s grace in its various forms.”

This kind of life goes far past husband and wife, parent and child. The church, along with the marriages and families within it, are meant to demonstrate, in practical ways, Jesus’ own love and care for the needs of the world.  We’re supposed to band together, link together, serve each other, not so we can gain power, win elections, force our rules on everyone else, but so we can be more effective in serving the needs of the world.

I’ve been helping a family with a difficult move, in a way that has taken more time than I had planned. One afternoon one of the family’s teens helped me packing the kitchen. He had hoped to spend the time with friends, but was submitting to his mother’s request to help. As we worked, he talked about what he’d rather be doing, then asked, “And why are YOU doing this?”

I explained that although we’re not family, we’re family. I explained that there were times in my teens when my own family fell apart, and there were people from our church who aligned themselves with us, invited us to live with them, sacrificed themselves for us, treated us as part of the family. I didn’t confuse him by saying “this is what hupotassō looks like,” but that’s what I was thinking. It has nothing to do with who gets to call the shots, who gets to make the rules. It has everything to do with whose need, today, is greatest, and who has gifts to use to meet that need.

There are some scholars and pastors who do a great job of working through the thorny passages about men and women, who gets to lead, who gets to talk when:
For me, this is all useful, helpful information, but maybe it’s enough to consider the simple summary Peter offers: Love each other deeply. Offer welcome and hospitality, even when you’d rather not. Use your gifts to help others. And when it comes to power? Remember Jesus, and his gentle reminder that the leader is the one who loves most and serves longest, at the greatest personal cost.


This is the fifth in a Lenten series:
Looking toward Lent
Lenten Sorrow : Lament and Nacham
Lenten Silence: Charash, Be Still
Lenten Sweetness: Tasting Towb

Other Synchroblog posts on the All About Eve topic:
Michelle Morr Krabill – Why I Love Being a WomanMarta Layton – The War on Terror and the War on WomenEllen Haroutounian – March Synchroblog – All About EveJeremy Myers – Women Must Lead the ChurchCarol Kuniholm – Rethinking HupotassoWendy McCaig – Fear Letting Junia FlyTammy Carter – Pat Summit: Changing the Game & Changing the WorldJeanette Altes – On Being Femalekathy escobar – replacing the f-word with the d-word (no not those ones)Melody Hanson – Call Me Crazy, But I Talk To Jesus TooGlenn Hager – Walked Into A BarSteve Hayes – St. Christina of PersiLeah Sophia – March Syncroblog-All About EveLiz Dyer – The Problem Is Not That I See Sexism Everywhere…Sonja Andrews – International Women’s DaySonnie Swenston-Forbes – The Women
Christine Sine – It All Begins With LoveK.W. Leslie – Undoing the Subordination of WomenCarie Good – The Math of Mr. CardinalDan Brennan – Ten Women I Want To Honor

As always, your thoughts and comments are welcome. Click on the  _commentslink below to open the comment box.

Posted by Carol Kuniholm at 8:58 AM