Whose Seed? Whose Food? 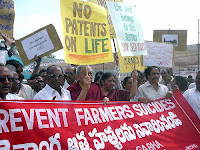 In January, seed catalogues start arriving in my mailbox: Burpees, Gurney’s, Stark Bros, others. I like to page through, thinking about what I might plant, marveling at the varieties of tomatoes, squash, peppers.
This year, though, my thoughts have been turning in a different direction. Last weekend I helped a local group host a screening of The Corporation, a sobering film about the role of multinational corporations and their impact on food supply, energy policy, rights of workers, and a wide range of other important topics.
One segment of the movie describes global agribusiness Monsanto’s sale of Bt cotton to illiterate, traditional farmers in . In 1998, the World Bank forced to open its seed sector to multinational corporations like Monsanto. Monsanto promised that its patented, genetically modified cotton would yield huge increases in returns and allow a decrease in the amount of pesticide used. Farmers were provided loans to shift to the new seed. They quickly discovered that Bt cotton required far more pesticide than previous varieties, needed twice as much water as traditional cotton, and that they would be prosecuted if they tried to save seed to plant the following year. The harvest yields were not large enough to cover the increased costs. In fact, most farmers found their yields were smaller.
Farmers who believed Monsanto promotions found themselves deep in debt, without seed for the new year ahead and without funds to buy more seed. For Indian cotton farmers, the margin was always slim, with seed, crop, and climate held in fragile balance. Since the introduction of Monsanto’s seeds, that balance has disappeared. More than 200,000 Indian farmers have committed suicide under the weight of crushing debt. In 2010, the Indian National Crime Records Bureau estimated that 46 farmers were killing themselves each day – one suicide every 30 minutes. 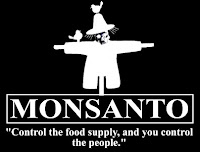 Monsanto’s disruption of traditional farming methods, in and countries around the globe, goes far beyond false advertising and terminator seeds (seeds genetically altered so that the next generation of seed is sterile). While buying up seed companies large and small, Monsanto has also been applying for patents of traditionally grown crops that have been selected over centuries for disease or pest resistance. At the same time, company enforcers have been suing farmers, in the and other countries, whose farms show signs of pollination from Monsanto patented plants. Since pollen can be carried by bees, or travel on the wind, and since seed itself can drift, Monsanto patented variants can show up in neighboring fields. Hundreds of farmers have lost to Monsanto in court, with hundreds more settling out of court rather than face bankruptcy in the face of legal fees. As the company patents seed traditionally passed on from farmer to farmer, farmers around the world can now be sued for growing the same plants they’ve grown for years.
For over half a century,  Monsanto has been working to control markets, and has been marketing products with false promises. Monsanto produced and marketed Agent Orange –the herbicide used during the Vietnam War. While Monsanto said it was non-toxic and could be sprayed safely to deforest large tracts of jungle growth, the chemical killed and maimed hundreds of thousands and caused an epidemic of miscarriages, stillbirths, and horrifying birth defects among the people of .
Monsanto was also responsible for marketing and manufacturing DDT, promising the chemical was completely harmless to humans and other creatures. DDT was eventually banned in the , but not before the bald eagle and osprey were almost extinct.
Roundup is another popular Monsanto product, the most widely used herbicide in the .  About 100 million pounds are applied to farms and lawns every year. According to Monsanto, Roundup is bio-degradeable, non-toxic, and completely safe for birds and animals. According to independent researchers in a variety of countries, Roundup’s combination of ingredients can cause cancer, tumors, and birth defects. 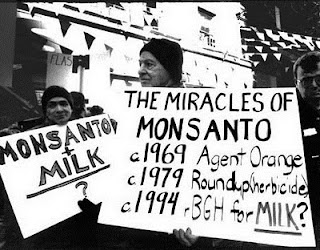 Another Monsanto invention –recombinant bovine growth hormone – rGBH (also called rBST, or Prosilic), is marketed to dairy farmers to increase milk production. The testing period in the was only ninety days. According to Monsanto, “there’s nothing to worry about.” When a team of investigative reporters found that there were, in fact, health implications to consider, Monsanto bullied Fox News into killing that report. , Europe, , , and other countries have banned rGBH. In the , Monsanto fought consumer requests to have rGBH milk labeled, even pushing laws banning organic dairy farmers from advertising or labeling “no rGBH” milk.
Monsanto has a reputation for saying “this is harmless,” without doing the necessary research to be sure that’s true. Untested Monsanto products have left a wide swath of misery in countries around the world.
Which brings me back to my seed catalogs. As Monsanto buys up smaller seed companies and introduces unlabeled genetically modified seed, how do I know what I’m growing? The Monsanto seed monopoly is hard to track, but food activists believe the company now controls 97% of the world’s maize market, and 95% of the global cottonseed supply. Seed prices are skyrocketing, as Monsanto exercises control over the supply.
Trying to sort out the implications of the Monsanto seed monopolies and the introduction of GMOs (genetically modified organisms), here’s what I’ve discovered: 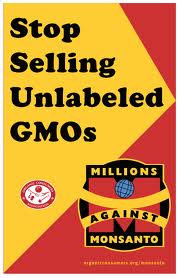 I’ve been wondering, for years now, why there are so many mystery illnesses that didn’t seem to exist when I was younger, or which occurred with much less frequency: autism, Alzheimer’s, asthma, food allergies of every kind, chronic fatigue, persistent acne, unexplained digestive disorders. Biologists and physicians around the globe are tying these to the untested, undisclosed additives and alterations in our food.
GMOs have been flooding the market in the for the past fifteen years and the upswing in most of these ailments, along with increases in some kinds of cancers and tumors, tracks almost exactly with the increase in GMOs. As a result of proliferating health concerns, and ongoing research, almost fifty countries now insist that any genetically modified food be labeled; some nations ban all GMOs, including honey from bees in countries like ours where GMOs are permitted.
“Nonsense,” says Monsanto. “Nothing to worry about.”
At what point does this become my concern? Should I care about what happens to cotton farmers in ? Rice farmers in ? Corn farmers in ?
Should I sign on in support of organic farmers here in the , facing Monsanto in court this week in the opening hearing of a lawsuit, Organic Seed Growers and Trade Association (OSGATA) et al v. Monsanto, challenging Monsanto’s abusive seed patenting practices and struggling to keep the organic food movement alive?
Should I join the many health and food democracy groups begging the FDA to require that GMOs be labeled, so those afflicted with mystery illnesses can shop with greater confidence and protect themselves from the harm of altered foods??
In 2 Corinthians, Paul urged the Corinthian Christians to express their support of their struggling brothers and sisters in . He reminded them that as they reached out with generosity and concern: “he who supplies seed to the sower and bread for food will also supply and increase your store of seed and will enlarge the harvest of your righteousness.”
In all the talk about seeds, GMOs, farmers, I find myself thinking about the amazing gift of seed, the dangers of selling tampered seed without years of careful research, and the disaster waiting for all of us if Monsanto and its agribusiness colleagues are allowed to continue putting profit before human health and sustainable farm practices. 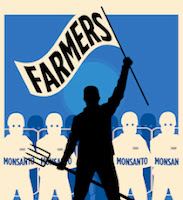 The tipping point in all this will be an informed American public speaking out, not only on behalf of our own safe food supply, but on behalf of small farmers here and around the world.
Want some action points?
Express support for the organic farmers in their hearing this week against Monsanto:   Add your voice 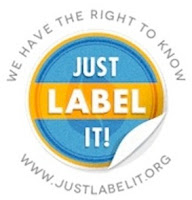 Ask the FDA to require GMOs to be labeled:  Just Label It 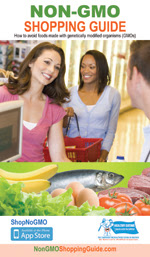 Download a non-GMO shopping guide as an ebook, iPhone app, or pdf file, and vote with your dollars for GMO-free food.  Shopping guide.

As always, your thoughts, suggestions and comments are welcome.
Posted by Carol Kuniholm at 8:53 AM