You will go out in joy
and be led forth in peace;
the mountains and hills
will burst into song
before you,
and all the trees of the field
will clap their hands.
(Isaiah 55)

My yard is full of birdsong: song sparrows, tufted titmice, wrens setting aside their normal complaints to celebrate spring from a perch along the picket fence. Even the blue jays’ metallic squawks sound more melodic than usual. Spring is here, the daffodils are blooming, and the tree tops are exploding with exuberant calls.

At this point in Lent, I often feel an inner disconnect. The world is brightening, days are lengthening, yet I’m still in a place of prayerful grief.  My experiments with fasting remind me of how many hungry children hold life by a thread. My next meal is just steps away, while millions of mothers have no next meal to offer their starving children.

This world is a broken place, and feels more broken by the day. Our food supply is held captive by a narrowing handful of global agri-monopolies. Our water supply is threatened by ever-more-reckless strategies for maintaining dependence on fossil fuel. Our health is jeopardized by genetic modification in everything from popcorn to sugar to canola oil. Our fragmented society hides its wounds behind closed doors, but the pain spills out in addictions, homelessness, spiraling anger, epidemic depression. Think and pray too long in any one direction and I find myself deep in lingering lament.

One of our Lenten readings this past week was the servant song of Isaiah 52:13 through 53, a Messianic prophecy written seven hundred years before Christ's birth and painful death:

Surely he took up our pain
and bore our suffering,
yet we considered him
punished by God,
stricken by him, and afflicted.
But he was pierced
for our transgressions,
he was crushed for our iniquities;
the punishment that brought us peace
was on him,
and by his wounds we are healed.
We all, like sheep, have gone astray,
each of us has turned to our own way;
and the Lord has laid on him
the iniquity of us all.

Reading a few verses before, to catch the context, I was struck at this command:

Listen!
Your watchmen lift up their voices;
together they shout for joy.
When the Lord returns to Zion,
they will see it with their own eyes.
Burst into songs of joy together, you ruins of Jerusalem,
for the LORD has comforted his people, he has redeemed Jerusalem.

It would make sense to burst into songs of joy when the restoration is accomplished, when the promised redemption is accomplished. But this instruction is given to “you ruins of Jerusalem.” The restoration promised is nowhere in sight. The book of Isaiah was written during a time of deepening disobedience, on the unavoidable eve of invasion, captivity, destruction. Burst into songs of joy in the middle of that? How?

Digging back through the early Hebrew words, I find eight words for “singing,” thirteen more for “sing.” Some of the words have interesting double meanings: one, “massa'”, can mean singing, lifting a load, carrying a burden. Another, “`anah,” can mean affliction, humility, songs of lament.

The word used in Isaiah is anr, transliterated “ranah”, which can mean to overcome, to cry out, shout for joy, give a ringing cry, rejoice.

I’m reminded of one of my favorite Old Testament stories, from 2 Chronicles 20. The people of Judah were confronted with a “vast army” and came to King Jehoshaphat in fear. Jehoshaphat, in front of his people, cried out to God: “Are you not the God who is heaven?” He recounted the times God intervened for his people, described the danger confronting them, and confessed: “We have no power to face this vast army that is attacking us. We do not know what to do, but our eyes are upon you.”

God spoke through a man in the crowd, Jehaziel, an apparent nobody, who promised that if they went out to a nearby pass to watch, God would defeat their enemy for them.


“After consulting the people, Jehoshaphat appointed men to sing to the Lord and to praise him for the splendor of his holiness as they went out at the head of the army, saying ‘Give thanks to the Lord, for his love endures forever.’”

As thy began to sing and praise, the Lord set ambushes agains the men of Ammon and Moab and Mount Seir who were invading Judah, and they were defeated.”

“The fear of God came upon all the kingdoms of the countries when they heard how the Lord had fought against the enemies of Israel. And the kingdom of Jehoshaphat was in peace, for his God had given him rest on every side.”

There’s much in that story that captures my interest, but the idea of singing in the face of fear and danger has always challenged me. How do we sing, or shout for joy, when the evidence around us points to disaster?

Burst into songs of joy together,
you ruins of Jerusalem,
for the Lord has comforted his people,
he has redeemed Jerusalem.

Really? What if I don’t see it?

Reading on through the servant song, I come out the other side to a similar instruction:

“Sing, barren woman,
you who never bore a child;
burst into song, shout for joy,
you who were never in labor;
because more are the children of the desolate woman
than of her who has a husband,”
says the Lord.

In a patriarchal culture where status depended on producing sons, where the future was guaranteed by multiple descendents, the barren woman was an object of scorn or pity, marginalized, deprived of future joy.

Yet she’s instructed to shout for joy anyway, to burst into song. Because she has more children (already?) than those less desolate. It doesn't seem to make sense.

Yet Isaiah insists that we live in the knowledge of God’s faithfulness in the past, and in celebration of his goodness in the future. Even in the pain of the present.

I find that hard. Praying this past week with a friend whose present is painful in the extreme, we wondered together: How do we live joyfully, right now, when every day hurts? How do we stay completely present to those around us, to the needs of the day, not shut it out, not medicate it away, not close ourselves off while we wait for that far-ff “someday” when things will be better?

Isaiah’s answer is strange, yet powerful. Ranan. Sing for joy. Sing in the promise of redemption, in the brokenness of today.

If you need logic, don’t even bother. It defies logic. Yet, the reality holds true. As Jehoshaphat and his people learned, as David and the other psalmists demonstrated, as Paul and Silas found, singing in prison while an earthquake opened the doors, joyful praise leads to freedom, sometimes opening doors in the physical world around us, more often allowing us to stand in a reality invisible to others, but no less real: the kingdom of God unfolding, here yet not here, now, not yet.

This joyful song is personal, but also political, as the stories in New and Old Testament suggest, as Freedom Riders of the sixties found, as the Singing Revolutions of 1987 to 1991 made clear: the internal freedom that comes with joyful song can bring the courage to trust God’s work in the broken halls of power, the disrupted dialogue of politics. Germans in Liepzig, fueled by the words of the Sermon on the Mount, filled the streets with singing in defiance of the Soviet police.  Lithuanians in Vilnius sang hymns and folk songs in public squares, then joined with Estonians and Latvians in a human chain of more than a million people stretching four hundred miles, a chain of freedom that helped lead to the dissolution of the USSR.

Where does that courage come from? It starts in honest lament, grows in times of prayer and study, finds power in the knowledge that God has been faithful to his people, across time, across all human borders. Alive in the present, we stand in the knowledge of the past, and celebrate the invisible, promised future. Waiting for Easter, for change, for healing, we sing. Awake, my heart. Burst into song. Rejoice. Ranan, ruined cities, for you have been redeemed. 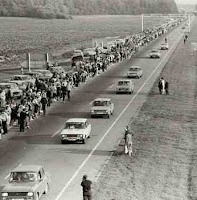 
Awake, my heart
And praise the Creator in song
Who provides us with all that is good
And bears our burdens too.
(Estonian folk song
sung during the singing revolution)

As always, your thoughts and comments are welcome. Click on the  _comments link below to open the comment box.

Posted by Carol Kuniholm at 4:12 PM