For over a decade, I spent a week each July in Kensington, a neighborhood in Philadelphia just five miles north of Independence Hall. A century ago Kensington was a major manufacturing hub, a prosperous blue-collar community with plenty of textile jobs, safe streets, thriving churches.

Today, Kensington has the lowest per capita income in Pennsylvania and the highest density of children. Our mission in Kensington was to bring hope to children with little hope, to proclaim the Prince of Peace and his good news to a community where every person, on every street, has a family member in prison, knows someone who died at the end of a gun.

For me, policy and politics are shaped by what I know of the families in Kensington: the children afraid to pass the drug dealers on the corner, the young adults struggling to stand firm against the implacable pressures of poverty and violence.

My political check list reflects, at least in part, the challenges shared by friends on crumbling front stoops, on pot-holed corners, on the hard wooden pews in a hot, historic sanctuary.

So guns. Let’s start with guns.

Fast and Furious continues in the news, as does the sad, unfolding case surrounding the death of Trayvon Martin and Florida’s Stand-Your-Ground law.

“Are you pro-Second Amendment?”

That’s the litmus question that gets asked of candidates. But what does it mean to be pro-Second Amendment?

Is it necessary to also be pro-concealed weapons?

Should there be limits on who can carry a concealed weapon? 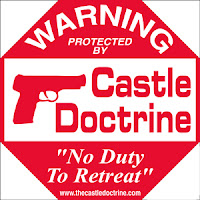 Are all guns equally okay?

Is a ban on assault weapons a stand against the liberty and the Second Amendment?

And do we really want to pass more laws that say we all have the right to shoot someone, unarmed, who seems to be a threat?

Does this matter?  Ten years ago a few hundred thousand Americans had permits to carry concealed weapons. This year, that number passsed 6 million. Are "left-wing liberals" the only ones who find this troubling?

Until the early 1990s, there was general agreement: regulations restricting the sale and use of weapons keep us all safer while allowing for appropriate use of certain classes of guns. The NRA was a friendly organization promoting gun safety, hunters’ groups, instruction in gun use for kids at camp.

I was an NRA member myself, the kid version. I earned an NRA Sharpshooter pin on B-B guns, and a Marksman First Class patch with twenty-twos.

But as I said, somewhere along the way something changed. It became impossible to advocate for reasonable regulation without being accused of wanting to outlaw guns. Or being called an "anti-gun nut."

Since 1994, many many gun restrictions have been lifted, and any attempt to move in the other direction has been voted down. Decisively. At the cost of careers, reputations, and reasonable public discourse. More plans to weaken gun laws are in the works.

I’m no expert, but it seems obvious: if there’s a limit on legal guns, once people who want them have them, a few, a modest collection, the gun industry’s market slows. And in an economy based on unrestricted growth, on constant demand, on greater profits this month than last, anything that slows that growth is the enemy. 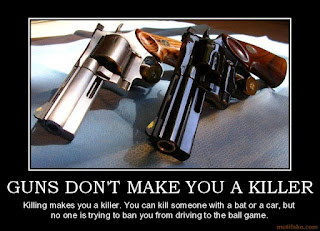 Which is why the gun industry has poured millions into the NRA, into ALEC (the American Legislative Exchange Council), into legislation advocating more guns, and more dangerous guns, for anyone who wants them, deliberately working to destroy anyone who gets in the way.

“If guns are outlawed only outlaws will have guns.”

That’s one of the slogans introduced by the NRA.  It’s dishonest on lots of levels: to start, as I said, no one wants to outlaw guns.

“Guns make us all safer.” Seriously? Try telling that to the family of the pregnant Kensington mom shot in a drive-by shooting. Or the kid who witnessed a murder, admitted she saw it, and was shot a month later. Or the four year old who shot himself in the eye, playing with a gun in his babysitter’s home.

“Any controls will start us on a slippery slope, leading to a ban on all weapons.”

This may be the saddest, most dangerous idea of all: that any step away from extremity can be interpreted as a mad dash toward the opposing extremity. Concern about unregulated commerce is interpreted as a move toward communism.  Suggestion that some arenas are best handled by public, rather than private, agencies is interpreted as outright socialism. Yet without incremental reform, nuanced concession, reasoned compromise, policy becomes a football tossed to and fro by angry, irrational extremists. 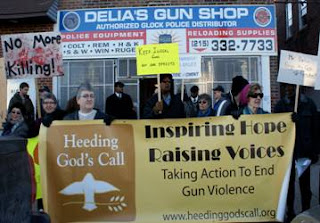 In Philadelphia, groups opposing unregulated guns proliferate. Mothers Against Guns, Ceasefire, Heed the Call. Every weekend, on some street corner, or church, or local park, there’s a vigil: in memory of someone killed by a gun, in protest of a notorious gun shop, in prayer for greater protection from the scourge of gun violence that shapes the daily life of those in urban neighborhoods.

Nationally, Mayors against Illegal Guns, a coalition of over 600 mayors, advocates against federal legislation that undercuts local attempts to control the sale and use of guns. Of immediate concern: legislation in both the House and Senate that would upend the rights of states and municipalities in setting eligibility requirements for carrying concealed, loaded guns in public:


"Under current law, some states refuse to grant concealed carry permits to people convicted of violent crimes, to people younger than 21, or to applicants who haven't completed basic gun safety training.  Other states have lax requirements, or none at all. These bills would override those local decisions and force states to allow non-residents to carry concealed, loaded guns in public even if they would not qualify for a permit under local law.

"Both bills are strongly opposed by police, prosecutors, domestic violence experts and more than 625 Republican, Democratic and Independent Mayors Against Illegal Guns."

"Millions of Americans are looking for work, but some senators think catering to the Washington gun lobby is a good use of time and taxpayer money. These bills are more extreme versions of a measure the Senate had the good sense to reject in 2009. They are opposed by police, prosecutors, domestic violence opponents, faith leaders and more than 625 mayors of all political stripes.  And they are opposed by actual gun owners - 82 percent of whom believe the states, not Washington, should decide who can carry hidden guns in public places."

What do I take from this? 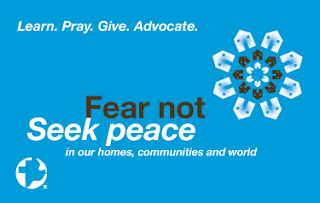 The Mennonite Central Committee has launched a "Fear Not, Seek Peace" campaign, inviting congregations to examine attitudes towards guns, review relevant scripture, and reminding us to trust in God, rather than ever more deadly weapons.

As I think of the Kensington kids I know, enthusiastically singing “Jesus, Prince of Peace” and wrestling with the call to forgive and to turn the other cheek, I pray we look past the gun lobby’s simplistic slogans and loud advocacy of unregulated gun rights, and think more carefully about what it means to seek and stand for peace.

This is part of an continuing series about faith and politics: What's Your Platform?

More than ever, I welcome your thoughts about which issues to consider, as well as your insight, comments, and questions.  Look for the "__ comments" link below to leave your comments.
Posted by Carol Kuniholm at 8:15 PM