We live in a world thirsty for grace, hungry for any hint of blessing.

“I tell you, love your enemies and pray for those who persecute you, that you may be children of your Father in heaven. He causes his sun to rise on the evil and the good, and sends rain on the righteous and the unrighteous.” (Matthew 5) 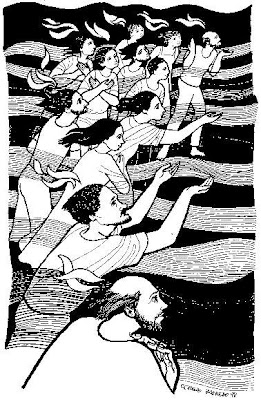 On Pentecost, God’s grace rained down on the waiting disciples, then poured through them to the city around them:

“The apostles performed many signs and wonders among the people. . . .More and more men and women believed in the Lord and were added to their number.  As a result, people brought the sick into the streets and laid them on beds and mats so that at least Peter’s shadow might fall on some of them as he passed by.  Crowds gathered also from the towns around , bringing their sick and those tormented by impure spirits, and all of them were healed.” (Acts 5)

That is far outside most of our experience, yet there are times and places where grace bubbles up, rains down, flows like living water through thirsty crowds. Some of us shrug, explain it away, fine-tune  theologies that justify our unbelief.

Others of us pray, with the prophet Habakkuk:

Lord, I have heard of your fame;

I stand in awe or your deeds, Lord.
Repeat them in our day,
In our time make them known
Habakkuk 3

I have written about praying for a young woman named Emily, struck by lightening almost five years ago. A fellow Synchroblogger from the , Chris Jefferies of Journeys of the Heart and Mind, recently contacted me to say he’d been reading my posts about Emily and prayer and felt God prompting him to send me a book: The Grace Outpouring, Becoming a People of Blessing.

The title alone was enough to capture my interest. How do we become a people of blessing?

But I was also drawn by the sense of God weaving bits of his church together. Chris is part of a fellowship of Christians in . The book tells of God’s work at Ffald-y-Brenin, a retreat center in south-west .  My own little group gathering to seek God’s healing now includes a friend from , a lovely woman of faith from , a missionary’s daughter born in . Our backgrounds are all different. Our longing to know God more deeply is the same.

To me, one sign of God at work is the breaking down of boundaries, the weaving together of people from different places, different experiences. At Pentecost, the boundary of language was broken down:

“Parthians, Medes and Elamites; residents of Mesopotamia, Judea and Cappadocia, Pontus and Asia, Phrygia and Pamphylia, Egypt and the parts of Libya near Cyrene; visitors from Rome (both Jews and converts to Judaism); Cretans and Arabs—we hear them declaring the wonders of God in our own tongues!” (Acts 2)

But Pentecost was about more than breaking down of boundaries. God’s people, empowered by the Holy Spirit, began to do what Jesus had promised:

“Whoever believes in me will do the works I have been doing, and they will do even greater things than these, because I am going to the Father.”(John 14:12) 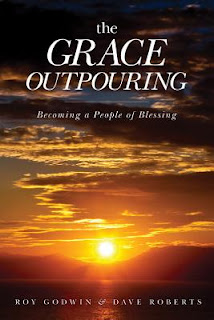 The Grace Outpouring is the simple story of how that promise is taking shape in one small corner of the world. Roy and Daphne Godwin stepped into leadership of a remote retreat center and began to explore what it means to be agents of blessing.

“The measure we use toward others will be the measure that he uses toward us. As we forgive we will be forgiven (Matthew 6:14-15). As we bless we will be blessed (Genesis 12:3).In Luke 10, the disciples were instructed to declare the peace of God over the towns they entered. For us today, that means asking God to manifest his character in the communities we live in. As we pray using the revealed names of God, he will come and show his beauty, mercy and compassion.” (36)

"I had already begun to question a culture of faith that places a high value on correcting strangers. . . . Having a heart to bless will challenge the judgmental mid-set that can color how we look at those we live with and among. We can become a “grace first” people. . .

"If we will let the wisdom of God inhabit our thinking, a consistent “grace first” pattern will emerge in our actions and words. “Grace first” prayer for healing doesn’t search for wrongdoing in a person’s life that needs correcting as a prelude to a miracle. There doesn’t seem to be much evidence for that approach in the ministry of Jesus. We simply ask that the power of God should touch that life.”

Godwin describes the ways he and others have seen God’s blessings at work: miraculous healing of physical and mental illness, sudden insight into spiritual things, unexpected unity, restoration of relationships, conviction of sin, deep experience of forgiveness. The stories are told simply; a statement at the start of the book explains:

“God is too great to need our exaggeration. This book contains many testimonies as spoken to us by guests at various times. We want to be as accurate as possible. If the reader is aware of any error, please let us know so that we many correct it in future editions.”

Some of the stories from the book are excerpted, and indexed, on Chris Jeffries’ Journey’s of the Heart and Mind. More recent stories are gathered at Kingdom Vision UK.

These stories resonate deeply with what I’ve seen of the way God works: bringing to light deep hurts no one else could touch, meeting doubts, anger, and grief with his own great love. Revealing truth through dreams. Speaking directly – sometimes in an audible voice – to those who doubt his presence.  Restoring damaged joints, healing mysterious, debilitating illness.

Reflecting on the healing seen at Ffald-y-Brenin, and beyond, Godwin concludes:

“It seems clear to me that it’s impossible biblically to separate the good news of the kingdom from healing, because if you actually read the accounts of the Gospels and Acts, they flow together, so that when mercy flows out to us it is not just to help us find forgiveness, but it’s also to do with all that we are. This unstoppable stream, this river, this flood that is released upon us touches every part of our lives. . .

"When Jesus came into a community, it was good news for those who were open to welcome him. Although they were amazed by his words and teaching and dazzled by the miracles, it was the outflow of his life that was such good news for them. . . . He reached out to the sick and healed them, opened blind eyes, restored deaf ears, lifted the weight of condemnation off the guilty and prompted them to live a different way in the future.

"All this, he taught, was a sign that the had come upon them. His healing miracles were not an incidental happening while he got on with the real business of preaching the gospel. He was the gospel. It was the overflow of his presence empowered by the Holy Spirit that was the breaking in of the kingdom.

"When jesus commissioned the disciples, it was with the instruction to mirror his own ministry. They were to heal the sick, release the oppressed, and declare that the was close. God cares for the whole person, and the gospel, the good news, is for the whole person.”(13)

To all that, I say “yes,” while I wonder: why does healing come so freely in some places, and so rarely in others? How do we continue to pray when it seems like nothing changes?

I’ll be back to this topic next week. There’s more to process, and much more to learn.

“A kingdom worldview says that mercy and grace come first. ..

"What might the song of the redemptive community we aspire to be sound like? Perhaps these words go some way toward capturing its essence:

We welcome all who come here.
We greet all that we meet.
May we be as warm and open as Jesus was,
With a heart for the last, the lost, and the least.
We don’t want to look away
Or sweep anybody under the carpet.
With God’s help we will not diminish anybody.
We will be the voices of mercy,
Blessing all with the love of God
In the wonderufl name of Jesus.

"So how do you make this vision a reality in the streets and buildings around you? 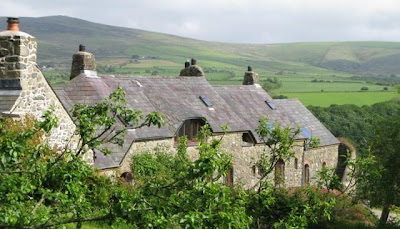 Other recent posts on prayer:

Other posts on Pentecost: