The Synchroblog topic this week is “What does social justice mean to you?”

After two months of exploring "God’s Green Equity," puzzling over environmental issues, grieving at the groaning of our sadly battered globe, social justice, to me, has much to do with our mistreatment of places. Social justice would mean clean water restored to the town of , now struggling with a toxic water supply after contamination from fracking wells. Restoration to communities impacted by mountain top removal in Virginia,West Virginia, Kentucky, Tennessee, and in places far beyond. Reclamation of the
devastated tar sand region of , and repair of indigenous communities shattered by the “slow industrial genocide” of tar sand extraction.

Social justice, to me, means wanting for you what I want for myself: clean air, clean water, good schools, decent jobs. It’s the logical extension of the command to love your neighbor as yourself. I was fortunate to have good public schools, grants and scholarships that made college possible. I want the same for my kids and grandkids, but also for yours, and the kids I know in Kensington, an urban neighborhood where schools are understaffed, under resourced, over-burdened with children who start off behind and never catch up.

This past week was “New Economy Week,” calling attention to the need to rethink our economic model. If you took time to watch the Wendell Berry portrait I linked to several weeks ago, you heard discussion about “the two great aims of industrialization: replacement of people by technology and the concentration of wealth in the hands of a small plutocracy.” According to , both have been accomplished.

The New Economy Coalition invites conversation on the resultant issues: “growing inequality, chronic unemployment, financial instability, undemocratic consolidations of power, environmental crisis, and the
declining wellbeing of communities, families, and individuals.  Many of us have come to the realization that our economy is out of control, undermining many of those things we hold most dear. ” 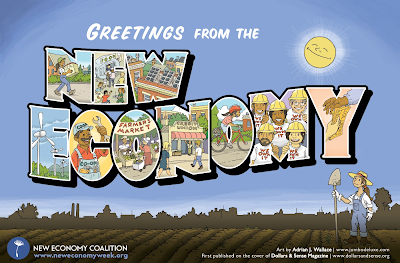 Social justice suggests that love of my neighbor takes precedence over love of our current economic model, and the New Economy Week points to alternative approaches. In worker-owned cooperatives  (like REI, Equal Exchange  or King Arthur Flour), profit stays in the hands of those who create it. In localized food markets, food dollars benefit farmers who grow the food, rather than global corporations with huge marketing and lobbying budgets. In local credit unions, money stays in the community, and profits are shared by members. B Corps (or Benefit Corporations) another idea supported by the New Economy Coalition, are companies legally authorized to prioritize social and environmental needs equal to or above profit. These “triple bottom line” companies agree to sustainable practices, equitable labor arrangements, investment in local communities. is one of 20 states that have passed B Corps legislation; 18 more are on the way.

Another piece to this past week, also part of my reflections on social justice, was a conversation with a friend. She is a very intelligent, thoughtful, generous person who told me when I first met her, over a decade ago: “I don’t believe the Bible, and I don’t like Christians.”

In many conversations since then she’s explained that in her experience, Christians are hypocritical, judgmental, often mean-spirited, rarely willing to listen to any view but their own. She continues to assemble evidence from colleagues and acquaintances; I continue to listen and grieve.

In this week’s conversation, we decried the amazing waste caused by the government shutdown, shook our heads at the disrespect toward the president shown at the veteran’s rally last Sunday, and wondered together at the adamant, continuing resistance to the idea of universal health care. To my neighbor, these
were more evidence of the illogical, unjust behavior of Christians. To her, the face of Christ is the face of the man waving the Confederate flag outside the White House, or the angry faces of her Christian acquaintances who enjoy good health care but can’t see why the government should get involved in providing care for those without.

An article two days ago in Huffington Post describes “The Far Right Christian Movement Driving the Debt Default.” Whatever you think of debt default, political parties, or the Huffington Post, it’s worth pausing to consider the energy behind efforts to defund public education and the new health care act. Public education was historically a high priority of Christians, people of “the book.” When did that change?

And the extension of health care, historically, globally, has been driven by Christians, following in the footsteps of Christ, the healer. How did we lose that longing to see the health of others?

Which leads me back to social justice: I would much rather have “socialized” health care, with everyone guaranteed coverage, and no insurance companies doling out treatment and extracting billions of dollars to fund an unneeded layer of profit-driven beaurocracy. But I’d rather have Obamacare – the Affordable Healthcare Act – than see teenagers miss months of school because their teeth ache too much to concentrate, or young adults veer toward suicide because they can’t afford good mental health care, or friends lose their homes because unexpected illness leaves them buried in unpayable hospital bills.

I’ve been haunted this week by a Gerard Manley Hopkins poem: "As Kingfishers Catch Fire" (quoted in full below). poems are hard to read, with strange use of language, and layers of meaning. The punctuation is odd, the accent marks disconcerting. To explicate them feels a bit like sacrilege, yet in this case, I’ll attempt it.

suggests that all creatures reveal their own natures, while also reflecting something greater. Kingfishers in flight reflect the sun on their shimmering feathers; dragonflies glisten with the flame of sun-rays. Stones echo back the sound of well depths beyond. Each “deals out that being indoors each one dwells,” that is, each reveals what it’s made of, what it is,  while hinting at something more. The creaturely call is “myself”: “myself it speaks and spells, Crying Whát I dó is me: for that I came.”

The just man goes beyond this: acts out the justice and grace inside in reflection of  the grace and justice experienced from God himself, takes on the role of messenger of love by acting out the role of Christ: “lovely in limbs, and lovely in eyes not his.”

Each phrase of this poem could take paragraphs to explore fully: “lovely in limbs” reminds us of Christ’s limbs stretched out on the cross, in forgiveness and embrace. “Lovely in eyes not his” can be read in multiple ways: who is lovely? In whose eyes?  Like an endless array of mirror images, justice, grace and love reflect from God’s eyes, to Christ’s, to ours, to the watching world, and back to us again.

Here is the question that woke me up last night, that follows me through the day, that cries through every headline: why is the face of Christ, for so many, a face of judgment, anger, dismissal, rather than a face of love?

How did we come to give our allegiance to economic power, political parties, religious traditions, rather than to the one who calls us to come die with him, arms outstretched in loving embrace of a hurting, watching world?

What would happen, to our economy, our politics, our churches, if we were lovely in limb and lovely in eyes, if we lived justice daily, if all our goings reflected grace?

What would it mean if we wanted for even our enemies the same welcome, forgiveness, generosity, health, joy, shalom we crave for ourselves?

What if we actively took steps to make that happen?

What if Christ played, through us, in ten thousand thousand places?

As kingfishers catch fire, dragonflies draw flame;
As tumbled over rim in roundy wells
Stones ring; like each tucked string tells, each hung bell's
Bow swung finds tongue to fling out broad its name;
Each mortal thing does one thing and the same:
Deals out that being indoors each one dwells;
Selves — goes itself; myself it speaks and spells,
Crying Whát I dó is me: for that I came.

I say móre: the just man justices;
Keeps grace: thát keeps all his goings graces;
Acts in God's eye what in God's eye he is —
Chríst — for Christ plays in ten thousand places,
Lovely in limbs, and lovely in eyes not his
To the Father through the features of men's faces.


This post is part of the October Synchroblog. Links to other posts:
It is also the concluding post of a series on God's Green Equity:


Earlier posts on the same topic: