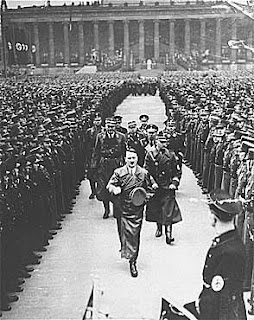 This Memorial Day weekend, I find myself wondering once again how the German church fell so completely in line with Hitler’s agenda. When the Nazis came to power in 1933, almost 2/3 the population was Protestant. 1/3 was Catholic.

Despite rumblings from some church leaders and organized resistance from others, most German Christians looked the other way when Jews and Romani (“Gypsies”) were rounded up. German Christians cheered Hitler in mass parades, applauded his celebration of German nationalism. German Christians filled the ranks of military forces and staffed the concentration camps.

What process of accommodation, compromise, justification and denial led men and women schooled in scripture to set aside what they knew of love, compassion, mercy and wisdom?

How did they fall into such blindness that they could support a megalomaniac’s assault on fellow citizens and neighbor nations?

Historians, looking for explanations of Hitler and his followers, have wondered if he was mentally disordered or “merely” evil. Much has been written about his narcissism, the incessant resentment and desire for revenge, his insatiable desire for power, his chronic anxiety, his distrust of even his closest advisors.

Reading in Romans 1 this week, I found myself pausing at the description of those given over to a depraved mind:

For although they knew God, they neither glorified him as God nor gave thanks to him, but their thinking became futile and their foolish hearts were darkened. Although they claimed to be wise, they became fools … [J}ust as they did not think it worthwhile to retain the knowledge of God, so God gave them over to a depraved mind, so that they do what ought not to be done. They have become filled with every kind of wickedness, evil, greed and depravity. They are full of envy, murder, strife, deceit and malice. They are gossips, slanderers, God-haters, insolent, arrogant and boastful; they invent ways of doing evil; they disobey their parents; they have no understanding, no fidelity, no love, no mercy. Although they know God’s righteous decree that those who do such things deserve death, they not only continue to do these very things but also approve of those who practice them.

To me, much of that sounds reminiscent of Adolph Hitler.

To me, it also sounds reminiscent of our current president, Donald Trump.

He delights in slander, boasts with abandon, fires employees who attempt to share information that contradicts his own constantly-changing point of view. I see no evidence in his behavior or biography of fidelity, love, mercy.

I can hear the howls from friends and family who believe he’s the answer to our nation’s need.

Just as many German Christians believed Adolph Hitler was the answer to their nation’s needs.

Much has been written by Christians in praise of Donald Trump. I read what friends and family recommend with sadness: much of what I'm given is rooted in fear, contradiction, or the strong belief that the ends justifies the means.

I offer in response my own recommendations:

Propaganda was a large part of the blinding of the German church, but propaganda only works when we like what we hear and choose to shut out the truth. We are all prone to confirmation bias.

I have my own guidelines for avoiding error:

Rereading that passage from Romans, I find myself wondering if there’s a surer, more immediate protection. Paul wrote “For although they knew God, they neither glorified him as God nor gave thanks to him.”

Evangelical conservative David French has opposed Trump strongly since before the 2016 election and may be the most thoughtful, consistent voice of concern I know. His latest essay, just days ago, describes a debate with Eric Metaxis, to me one of the most baffling of Trump’s evangelical supporters. French offers Metaxis’s points, his own response and concludes:

The question for pro-life Christians is simple, really. At the core of our public identity, are we abortion opponents, or are we ambassadors for the Gospel of life? And if the answer is the latter—as it should be—is it really true that Donald Trump “shames the church” because he’s showing us how to fight?

I say he shames the church, but in a very different way. He obscures the Gospel of life. In his cruelty he defies the Gospel of life. A Christian embrace of Trump does not tell each and every American that they are a person of “incomparable worth.” Instead, it presents a relentless message from the people of God that virtuous ends justify vicious means. At the end of the day, however, even if they win, their unjust man can and will undermine their just cause.

I believe French is right. And his essay, though long, is worth reading.

But then he ends in a curious way: with a video of a song, The Blessing.

Reading his essay this morning, then puzzled at his inclusion of the song, I found myself watching it, puzzled, then thankful, then teary. As the song grew, as the voices gathered, his point became clear.

It's not even our words of debate, disagreement, disapproval.

Our sure protection is the Gospel of life, the good news of Christ: joy, peace, love, praise, blessing.

Given to us, given through us to each other.

If you take nothing else from this week’s post, watch this song, and remember: in war, disease, political turmoil, God’s love will always have the final word.