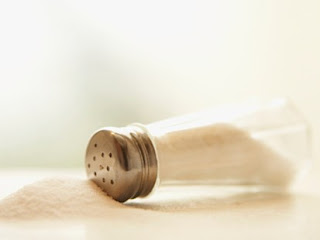 
Our sermon in New Chapel this morning began in the beatitudes. Geoff Simpson reminded us that Jesus was presenting a new kingdom, a new way of living. The setting mirrored the giving of the law on , but the new law is very different, and the new kingdom reverses what we’ve assumed to be true.

Later in Matthew 5, Jesus says “Do not think that I have come to abolish the Law or the Prophets; I have not come to abolish them but to fulfill them. For I tell you that unless your righteousness surpasses that of the Pharisees and the teachers of the law, you will certainly not enter the kingdom of heaven." That's a scary thought. But Geoff didn’t get that far. Instead, he stopped at “you are the salt of the earth . . . and you are the light of the world.”

All familiar. Yet, something in there caught me. Geoff suggested that we are the active ingredient in the , the ingredient like salt that flavors and preserves.

So if the salt isn’t effective, everything around it rots. (Geoff used the word “putrifaction.” Great word, although I had to laugh to  hear it used in a sermon.)

Here’s another thought, though: if the salt isn’t distributed evenly, everything rots.

I had a vision of salt sitting in the salt shaker, or the carton, as safe a gathering as it can find, muttering about the smelly world out there, beyond the shaker. That rotting unsalted world.

So - if the active ingredient isn’t active, the kingdom doesn’t happen?

Plenty to ponder there, but Geoff kept us moving, right to Isaiah 58, one of my favorite chapters. (My personal aspiration is summed up in verse 12. What title would I most like to be given? Repairer of Broken Walls. Restorer of Streets with Dwellings.)

It took me a minute to see what Geoff was saying: this kingdom Jesus proclaims becomes visible when we live as we’ve been told to live. And when we fake it, or look to the letter of the law, without understanding the heart behind it, the whole thing crumbles around us. We find ourselves praying with no response, wondering why God isn’t listening. But he’s right there, waiting for the active ingredients to activate:


Shout it aloud, do not hold back.
Raise your voice like a trumpet.
Declare to my people their rebellion
and to the descendants of Jacob their sins.
For day after day they seek me out;
they seem eager to know my ways,
as if they were a nation that does what is right
and has not forsaken the commands of its God.
They ask me for just decisions
and seem eager for God to come near them.
‘Why have we fasted,’ they say,
‘and you have not seen it?
Why have we humbled ourselves,
and you have not noticed?’
“Yet on the day of your fasting, you do as you please
and exploit all your workers.
Your fasting ends in quarreling and strife,
and in striking each other with wicked fists.
You cannot fast as you do today
and expect your voice to be heard on high.
Is this the kind of fast I have chosen,
only a day for people to humble themselves?
Is it only for bowing one’s head like a reed
and for lying in sackcloth and ashes?
Is that what you call a fast,
a day acceptable to the Lord?
“Is not this the kind of fasting I have chosen:
to loose the chains of injustice
and untie the cords of the yoke,
to set the oppressed free
and break every yoke?
Is it not to share your food with the hungry
and to provide the poor wanderer with shelter—
when you see the naked, to clothe them,
and not to turn away from your own flesh and blood?
Then your light will break forth like the dawn,
and your healing will quickly appear;
then your righteousness will go before you,
and the glory of the Lord will be your rear guard.
Then you will call, and the Lord will answer;
you will cry for help, and he will say: Here am I.
“If you do away with the yoke of oppression,
with the pointing finger and malicious talk,
and if you spend yourselves in behalf of the hungry
and satisfy the needs of the oppressed,
then your light will rise in the darkness,
and your night will become like the noonday.
The Lord will guide you always;
he will satisfy your needs in a sun-scorched land
and will strengthen your frame.
You will be like a well-watered garden,
like a spring whose waters never fail.
Your people will rebuild the ancient ruins
and will raise up the age-old foundations;
you will be called Repairer of Broken Walls,
Restorer of Streets with Dwellings.
Geoff didn't read all that, just enough to help us see the point. Then he challenged us to be salt and light where we are. I’ve heard that before. But throwing that instruction into the context of Isaiah 58 ups the stakes a bit: You want God to hear you? Listen to what He’s saying. You want Him to heal you? Be an instrument of healing to the poor, the naked, the hungry. You want to see His kingdom? Stand up to the current kingdoms of injustice and oppression, and “spend yourselves” on behalf of the hungry and oppressed.
The promises are grand. Light, healing, restoration, glory. We wait on God, but apparently, He’s waiting on us, to be the active ingredient. He’s asking us to spread out, shine out past our own safe little circles of light. To move past the religious activity and live as agents of righteousness in ways that are costly and real.
I’ve been asking God why we see so little of His kingdom, why promises of healing so often go unfulfilled. In other parts of the world, miracles are common. In places of poverty and desperate need, God demonstrates His power in healing, visions, amazing answers of prayer. Why not here? Why not now?
As I read in Ron Sider’s Living Like Jesus just this morning, “In 1968 per capita income in the was $9, 851 and church members on average gave 3. 14 percent. By 1992, per captia income had grown to $14,515 . . . but we only gave 2.52 percent!”
A quick look for more current statistics brought a new book to my attention, Passing the Plate, by sociologists Christian Smith, Michael O. Emerson, and Patricia Snell.

Passing the Plate shows that few American Christians donate generously to religious and charitable causes — a parsimony that seriously undermines the work of churches and ministries. Far from the 10 percent of one’s income that tithing requires, American Christians’ financial giving typically amounts, by some measures, to less than one percent of annual earnings. And a startling one out of five self-identified Christians gives nothing at all.
In a more detailed review of Passing the Plate, Ron Sider notes that
If just the "committed Christians" (defined as those who attend church at least a few times a month or profess to be "strong" or "very strong" Christians) would tithe, there would be an extra 46 billion dollars a year available for kingdom work. To make that figure more concrete, the authors suggest dozens of different things that $46 billion would fund each year: for example, 150,000 new indigenous missionaries; 50,000 additional theological students in the developing world; 5 million more micro loans to poor entrepreneurs; the food, clothing and shelter for all 6,500,000 current refugees in Africa, Asia, and the Middle East; all the money for a global campaign to prevent and treat malaria; resources to sponsor 20 million needy children worldwide. Their conclusion is surely right: "Reasonably generous financial giving of ordinary American Christians would generate staggering amounts of money that could literally change the world."
What does it mean to spend ourselves on behalf of the poor? More than putting money in the offering plate, but apparently, we haven’t even done that. It’s sobering to think that Western Christians could change the face of poverty across the world, but we’re too busy keeping up with the world around us. If that stinks, blame the salt.
Isaiah’s words haunt me. Challenge me. Activate me.
If you spend yourselves in behalf of the hungry
and satisfy the needs of the oppressed,
then your light will rise in the darkness,
and your night will become like the noonday.
The Lord will guide you always;
he will satisfy your needs in a sun-scorched land
and will strengthen your frame.
You will be like a well-watered garden,
like a spring whose waters never fail.
Your people will rebuild the ancient ruins
and will raise up the age-old foundations;
you will be called Repairer of Broken Walls,
Restorer of Streets with Dwellings.


Please join the conversation. Your thoughts and experiences in this are welcome. Look for the "__ comments" link below to leave your comments.
Posted by Carol Kuniholm at 4:34 PM