The Lord is Near

Rejoice in the Lord always. Again I say: Rejoice!
I’ve never liked it when people say “smile!” As if somehow smiling will make things better. If I’m not smiling, maybe there’s a reason?

So I confess, I also don’t much enjoy the song “Rejoice in the Lord always, again I say, rejoice.” Repeat. And once again. And … again.
Yet Paul, in his letter to the Philippians, said “Rejoice in the Lord always. Again I say: Rejoice!” This is just a few words before that other impossible instruction: “don’t be anxious about anything.”
What interests me is that we hear the instructions, but rarely hear the reason nestled so quietly between them: “The Lord is near.”
Paul was writing from prison, or house arrest, most likely in , and addressing Christians in a doubly hostile culture: a young congregation in a wealthy, isolated Roman outpost in northern , struggling with opposition and disunity. But his message, repeated through the short letter, is one of joy in the face of difficulty, danger, doubts about God’s provision and purpose.
For Paul, prison, pain, persecution, all the troubles he and his friends were facing, were welcome opportunities to press in closer to Christ, to know him better, to be more like him: “The Lord is near.”
Those little words, to me, are the key to the Christian life: The Lord is near. Because Christ is with us, we’re able to obey, to walk in grace, to love people who drive us crazy, to trust in God’s abundance when we’re told, from every direction, that we need to fight for our rights, our stuff, our fragile place in a fragile economy.

Rejoice in the Lord always. I will say it again: Rejoice! Let your gentleness be evident to all. The Lord is near. Do not be anxious about anything, but in every situation, by prayer and petition, with thanksgiving, present your requests to God. And the peace of God, which transcends all understanding, will guard your hearts and your minds in Christ Jesus. 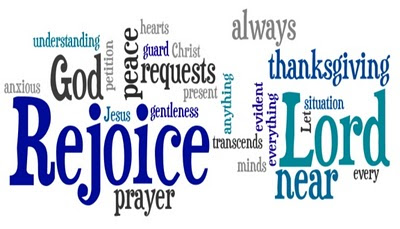 Please join the conversation. Your thoughts and experiences in this are welcome. Look for the "__ comments" link below to leave your comments.
Posted by Carol Kuniholm at 9:25 AM