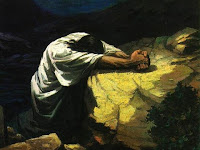 The taste
of rain

For some reason, kneeling and Lent seemed connected in my mind. Thinking back on the very non-liturgical faith tradition of my childhood, I can’t remember kneeling, or any mention of kneeling. We stood to sing, sat to listen. Our most demonstrative act was to shake someone’s hand after the service.
The first time I remember kneeling was when my grandmother had a heart attack, the spring I was 16. In grief, then prayer, I knelt beside her bed. It seemed the only thing to do. A few years later I witnessed a frightening domestic dispute, with threatened violence and verbal abuse. By the time the abusive party drove off, all I could think of was to kneel with the shaking injured party, and cry, and pray, and wait for God’s comfort and wisdom.
The first time I took communion in an Episcopal church kneeling at the altar, I found myself feeling deeply at home, spiritually fed in a profound and unexpected way, and thankful for the opportunity to kneel. There are times when kneeling seems the only thing to do, the best posture for meeting God, the safest place to be. After the tragic events of 9-11, our church held a prayer service, and I remember kneeling with so many others, thankful to kneel in God’s presence.
I’ve been thinking about kneeling this week, as the tragic news from Japan continues, as events in the Middle East unfold, as the world seems, more than ever, a precarious, fragile, broken place.
Why kneel? What are we doing when we kneel?
For me, kneeling can be a physical expression of lament. I kneel when life is too much, when the pain is too great, when there seems no place to turn. Nahum, describing the fall of Ninevah, says “Hearts melt, knees give way, bodies tremble, every face grows pale”  (Nahum 2). In Hebrew, the word for grief (כרא- kara) sounds exactly like the word for knee, kneel, smite, sink, fall, bring low (כרע - kara’).
Kneeling is also an expression of repentence. The prophet Ezra, made aware of Israel’s sin, tore his tunic and cloak, “and fell on my knees with my hands spread out to the Lord my God  and prayed: ‘I am too ashamed and disgraced, my God, to lift up my face to you, because our sins are higher than our heads and our guilt has reached to the heavens. From the days of our ancestors until now, our guilt has been great’” (Ezra 9). 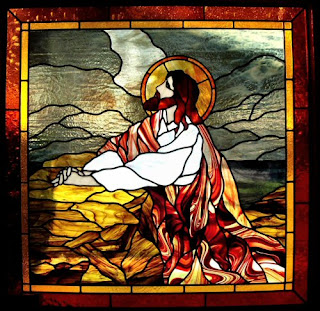 Even more, kneeling is an expression of submission, and supplication. We are small and God is great. In kneeling, we set ourselves in God’s hands. Lepers, seekers, desperate parents knelt as they called out to Jesus for help. Jesus himself knelt in Gethsemene, praying in submission and sorrow before his journey to the cross.
I sometimes find myself returning, when I kneel, to the words of TS Eliot’s “Little Gidding,” part of his book-length Four Quartets. Eliot was born in , but became a British citizen, and an Anglican, in 1927. Fourteen years later, he served as an air raid warden and firewatcher in during the Blitz, when German bombers targeted for 76 consecutive nights. Between September, 1940, and May, 1941, forty thousand British civilians, half of them in , had been killed by bombing. More than a million houses in were destroyed or damaged.
"Little Gidding" is about many things, but in large part it’s about the pain of living in a ruined city, in a time of great devastation, and the challenge of living in faith when hope seems gone. In a letter to a friend, Eliot noted that the memorable line “Ash on an old man's sleeve” referred to the debris of a bombing raid hanging in the air for hours afterwards. "Then it would slowly descend and cover one's sleeves and coat in a fine white ash." That second section continues with a description of the bombers leaving the city: “In the uncertain hour before the morning/ Near the ending of interminable night / At the recurrent end of the unending / After the dark dove with the flickering tongue /  Had passed below the horizon of his homing . . .”
In the section before that, Eliot writes of kneeling, and of prayer:

If you came this way,
Taking any route, starting from anywhere,
At any time or at any season,
It would always be the same: you would have to put off
Sense and notion….
…You are here to kneel
Where prayer has been valid. And prayer is more
Than an order of words, the conscious occupation
Of the praying mind, or the sound of the voice praying.

We come to our knees through different routes, through pain, guilt, grief, helplessness. And once there, we set aside “sense and notion,” all the games our minds play, all the willfulness so hard to escape. In kneeling, we speak to God in a way that goes beyond “the order of words, the conscious occupation of the praying mind, or the sound of the voice praying.” Certainly we can pray in any posture, but in kneeling, in a physical way, we declare our need, our dependence, our submission.
Psalm 22 says “all who go down to the dust will kneel before him— those who cannot keep themselves alive.” Contemporary Americans tend to be control freaks, desperate to fortify ourselves against the hazards that surround us. But despite our efforts, we, like all who have lived before us, are “those who cannot keep themselves alive.” Independent though we are, resourceful as we like to think ourselves, a moment of honest reflection in the light of earthquakes and nuclear meltdowns will remind us that we are in need of resources and wisdom beyond ourselves.
The famous poem “Invictus”, poet William Ernest Henley’s one claim to fame, boasts “I am the master of my fate: I am the captain of my soul.” The truth is something different. We are not masters of anything. We are frighteningly dependent. Watch the evening news and be reminded of how fragile this life is. In kneeling, we find our place again, as people of the Lord’s pasture, small sheep in his care: "Come, let us worship and bow down, let us kneel before the Lord our Maker; for he is our God and we are the people of his pasture, the flock under his care." Psalm 95
We kneel now, in penance and petition, but we are also told there will come a time when all will kneel.  Isaiah tells us: "Before me every knee will bow;  by me every tongue will swear." (Isaiah 45) Paul repeats this in Romans 14:  “‘As surely as I live,’ says the Lord, ‘every knee will bow before me; every tongue will acknowledge God.’

In Philippians 2, Paul expands this vision, to both a present reality (Jesus is already exalted, already give a name above every name), and a time in the future when we will kneel to acknowledge him:

to the highest place
and gave him the name
that is above every name,
that at the name of Jesus
every knee should bow,
in heaven and on earth
and under the earth,
and every tongue acknowledge
that Jesus Christ is Lord,
to the glory of God the Father.
Philippians 2

In these days when we see the whole creation groaning, we kneel to remind ourselves that the story doesn’t end here, and to demonstrate our allegiance to the coming king and his eternal kingdom, that time when “God’s dwelling place [will be] among the people, and he will dwell with them. They will be his people, and God himself will be with them and be their God. ‘He will wipe every tear from their eyes. There will be no more death’ or mourning or crying or pain, for the old order of things has passed away.”

Please join the conversation. Your thoughts and experiences in this are welcome. Look for the "__ comments" link below to leave your comments.
Posted by Carol Kuniholm at 10:27 AM