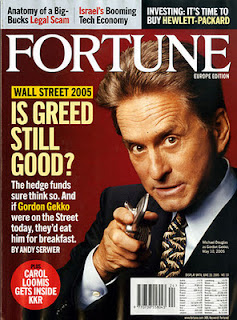 Reading this morning in Ephesians 5, I was challenged and comforted by the first two verses:

"Be imitators of God, therefore, as dearly loved children and live a life of love, just as Christ love us and gave himself up for us as a fragrant offering and sacrifice to God."

I’m always comforted at the thought that we are dearly loved children, and challenged by the idea of living the kind of love that embraces sacrifice for others.
I’ve read those verses before, as I’ve read the verse that follows. But this morning, verse 3 hit me hard:

"But among you there must not be even a hint of sexual immorality, or of any kind of impurity, or of greed, because these are improper for God’s holy people."

I’ve heard a lot, more than a lot, about sexual immorality. But staring at that verse, I found myself wondering when I last heard a sermon about greed. Or when I last heard a Christian politician speak of greed. When I last heard calls for legislation limiting, outlawing, punishing, greed.
Greed is part of the fabric of our lives. It’s the fossil fuel that powers the machine. It’s the engine that drives the global economy. It calls to us from our tv screens, sings to us from our radios. To question it is somehow un-American. Unpatriotic. Communist, maybe.
“Greed is good.” according to Gordon Gecko, the stock speculator in the movie, “Wall Street.” “Greed is good. Greed is right. Greed works!”
When stock speculator Ivan Boesky said "Greed is all right . . .greed is healthy " in 1985, his audience cheered. According to Donald Trump, you can never be “too greedy.” For him, wealth is a way of “keeping score”:  "I don't make deals for money. I've got enough, much more than I'll ever need. I do it to do it."
Walter Williams wrote about “The Virtue of Greed” in Capitalism Magazine:

“You can call it greed, selfishness or enlightened self-interest, but the bottom line is that it's these human motivations that get wonderful things done. Unfortunately, many people are naive enough to believe that it's compassion, concern and ‘feeling another's pain’ that's the superior human motivation.” 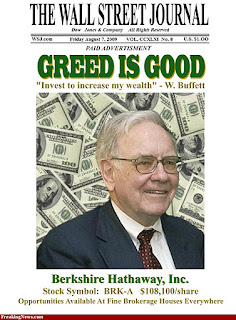 According to Williams and others, greed is essential to capitalism, progress, the American way.
It hasn’t always been so. Wasn’t greed one of the seven deadly sins? Is it still?
Scripture has a great deal to say about greed. Most listings of sins to be avoided include greed. The prophets, from Isaiah and Jeremiah to Hosea, Amos, Micah, warn about God’s anger against those who trust in riches, who hoard wealth, who gather more than their share, who misuse the land and exploit their workers.
Just a quick sampling:

"Your rulers refuse to obey the Lord. They are companions of robbers. All of them love to accept money from those who want special favors. They are always looking for gifts from other people. They don't stand up in court for children whose fathers have died. They don't do it for widows either." Isaiah 1:23

“From the least to the greatest, all are greedy for gain; prophets and priests alike, all practice deceit." Jeremiah 6:13

"You accept money from people who want special favors. . . You charge too much interest when you lend money. You get rich by cheating your neighbors. And you have forgotten me," Ezekiel 22:12

We somehow have missed the point God makes very clear in the words of the prophets: anyone who has far more than he needs has gained it at the expense of someone else, and at the expense of resources God entrusted for future generations. In a global economy we don’t see those we’ve harmed, the landscapes destroyed, but when we buy cheap goods or expect huge profits, someone has been underpaid, undercut, exploited, and too often, resources have been extracted in ways that leave water fouled, forests ruined, gaping holes in someone else’s land.
Thomas Aquinas warned that greed “is a sin directly against one's neighbor, since one man cannot over-abound in external riches, without another man lacking them.”
On Friday, October 7, day 21 of , some Jewish residents of decided to begin their Yom Kippur celebration with an evening service in New York's financial district. Yom Kippur is a time of repentence and forgiveness, and the first service starts with something called Kol Nidre, a renunciation of vows of allegiance and loyalty that have been taken under duress, in collusion with ungodly powers or kingdoms. A facebook invitation posted just days before drew a crowd of almost a thousand to a corner of Zuccotti/ Liberty Park, and the service took place without amplification, with speakers pausing after each sentence for the crowd to pass the words on to the outer rings in a way that no doubt echoes communication in pre-amplification days, but also has become standard mode of discourse for those involved in Occupy Wall Street. The service has been described in numerous blogs by those who were there. For many, it was a profoundly meaningful and personal event.
Getzel Davis, a rabbinical student at in , delivered a sermon explaining the appropriateness of the unusual Kol Nidre location:

"Forgiveness is important because once we can mourn our mistakes then we are no longer ruled by them. We are free to create things anew."

The service included prayers of repentence, and a time for those in attendance to call out their own repentance, echoed back through the crowd for all to hear.
Similar services took place in , and other cities where Occupy groups have become active. A blogger recounting his experience in reflected on the call to repentance experienced standing in a public square:

"When we read Isaiah on Yom Kippur, he inveighs against the sins of our society, in which we all bear a hand. As Rabbi Abraham Joshua Heschel said, “Above all, the prophets remind us of the moral state of a people: Few are guilty, but all are responsible.” The sins of Wall Street and corporations are all our sins – we buy the consumer products, we put our money in the banks and the mutual funds, we elect the leaders who fail to remedy corporate excesses. We are all the beneficiaries of these sins, even when we protest against them. Tonight at we inveighed against – and sought forgiveness for – and forgave sins like foreclosures, inadequate health care, cuts to social services, climate change, and countless other crises born of and worsened by corporate greed, we were forced to acknowledge our own role in them, and the benefit all of us derive from them. "

At the same time that the Jewish community was planning the Kol Nidre services, a Catholic man named James Salt was working on a papier mâché model of the golden calf. Inspired by the actions of Occupy Wall Street and his own time or reflection on a recent retreat, he wanted to lend spiritual and biblical support. A group called Faith in Public Life rented a van and brought his creation to , delivering it to Judson Memorial Church, where it stood overnight. Last Sunday afternoon, a group of ministers and other church leaders carried it through the financial district streets to Zuccotti / Liberty Park for a prayer vigil and interfaith service of repentance.
I’m impressed with the call to repentance in the face of greed, and that the call is personal: yes, they, the wealthy, powerful 1%, are guilty. But we are guilty too.
Change begins with repentance. Personal repentance, then corporate repentance. Personal change. Then corporate change.
Thinking about greed, about change, about repentence, I’ve been struck by a comment in Getzel Davis’ sermon:

"When people think about oaths, they usually think of verbal promises. In Judaism though, most of our oaths are “Chazakas” – or oaths taken through repeated action. By doing things again and again, we make internal promises about how we want to live. Other names for these might be habits, preferences, or addictions. These chazakas rule our lives, making things simpler by allowing us to live on autopilot ."

I would never articulate a loyalty to money. I would object to the idea that I worship the golden calf, or that my life is based on greed.
Yet, what are the chazakas in my life? The oaths taken through repeated action? The little compromises to material things, the quiet dependence on financial security?
Repentance begins with acknowledgement: we’ve gone the wrong way. But if it doesn’t become personal, and practical, it’s repentance in word only.  John the Baptist called for repentance, and insisted on “fruit in keeping with repentance.”
I’m not sure what that fruit looks like. I’m not sure where to start.
But I am sure repentance is needed, that greed is a bad foundation for a life, an economy, a nation. And that once we repent, God can point us toward something new, if we’re willing to listen and obey.

Please join the conversation. Your thoughts and experiences in this are welcome. Look for the "__ comments" link below to leave your comments.
Posted by Carol Kuniholm at 10:02 AM