Faith in Politics: Prince of Peace

Drones?
Today is Pulpit Freedom Sunday, promoted by The Alliance Defense Fund, a nonprofit legal group founded in 2008 to defend “the right to hear and speak the Truth through strategy, training, funding, and direct litigation” and to “defend Our First Liberty – religious freedom.” The idea is for pastors to assert the freedom of political speech from the pulpit, and to challenge congregations to vote for specific candidates who affirm core Christian values. Pastor Jim Garlow, of in , has become the unofficial spokesman and has been widely quoted this past week regarding his own plans for today’s sermon:

“Having said that, here's what the Scripture teaches specifically about that. And, after I go through that, as fully-devoted followers of Jesus Christ, we would not want to elect individuals - given the fact that the Bible has a great deal to say about economic, or life principles, or the definition of marriage in a scriptural context - we would not want persons who are in defiance of God's will in positions of authority over us. What fully devoted follower of Christ would want to defy God's will for how national and community life is to be ordered according to the Scripture?"

Garlow’s comments raise plenty of questions. A timely new book, Left, Right and Christ: Evangelical Faith in Politics, calls attention to some of these in its promotional press releases: 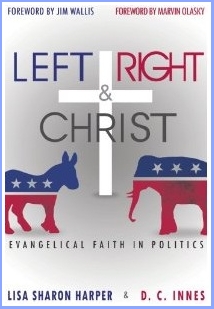 forward to seeing what the authors, progressive Lisa Sharon Harper and conservative D.C. Innes, have to say. I’m also curious about how many of the “pulpit freedom” sermons will talk about what it means to be peacemakers, or how God’s view for the poor informs their candidate endorsements.

I went to a Wesleyan college, and for decades now I’ve considered myself an Evangelical Christian, although both “Evangelical” and “Christian” have been so misused and misrepresented I’m hesitant to use either term. I share Garlow’s concern for aligning my vote with what I see in scripture.
But how do we decide which standards should be held closely by people of faith, but not legislated for those who don’t share our beliefs?
And who gets to decide which priorities trump all others?
Maybe most important, how should we respond to those who disagree with us?
Garlow says “we would not want persons who are in defiance of God's will in positions of authority over us.” But from what I’ve seen of how our parties work, God’s will is rarely the bottom line.  And it’s a very rare candidate who lines up with scripture in all the ways I would wish, from economic policy, to care for creation, to promotion of peace, to compassionate regard for immigrants, offenders, the weak, the sick.
“” is a strong word: is it possible that we could disagree about what God’s word says about particular current issues? Is it possible we could disagree about how best to see his will pursued?
This is an important time in the life of our country, in the unfolding story of global democracy, and in the sometimes contentious discussion regarding the role of faith in the public arena.
A friend recently pointed me toward a blog by a Sri Lankan Christian, Vinoth Ramachandra. He earned a PhD in engineering at the of , then went back to to help start a ministry to university students. He served for years as the South Asian Regional Secretary for the International Fellowship of Evangelical Students (IFES) and now provides leadership to IFES in Dialogue & Social Engagement, giving public lectures and seminars in universities, inviting students to think Biblically about the issues confronting them in their own nations.
I'm reminded every time I read his blog that as an American I have great power and opportunity to create change, not only in my own country but for people around the globe, and that as an American Christian I have the responsibility to use that power to demonstrate and make visible the kingdom of God as described by Jesus in the sermon on the mount. And I'm reminded that to many Christians around the globe, American Christians seem self-centered, naive, and out of step with the gospel.
To quote Vinoth's blog:

Jesus expects that the Church that is proclaiming the Gospel among the nations is also living out that Gospel before the nations. Namely, she is committed to peace-making, hungering and thirsting after justice, loving her enemies, healing the sick, sharing wealth with the dispossessed, striving for unity in the midst of differences . . .

I'm not sure those are the priorities that will be discussed this Pulpit Freedom Sunday.

Peace-making: Who can explain why our military budget is larger than the next six nations combined?
Hungering and thirsting after justice: Even to speak of economic justice is to risk being called a socialist.

Healing the sick: What’s behind the opposition to national healthcare? Who benefits from our current system? Who doesn’t?
Sharing wealth with the dispossessed: Isn't that socialism? Communism? Both? And aren't the dispossessed somehow at fault?
Unity in the midst of differences . . .   I can't quite picture that.
I’ve set myself a goal of spending an hour a day trying to understand where we are, how we got here, where we should be heading, how to help.
It’s worse than I thought, harder than I imagined. Democracy in the US is in a difficult place; divisions seem deeper every day.
Overcome just thinking about how how far we are from unity, I close my eyes, and I’m drawn back to the narrow churchyard at the Free Church of in Kensington, .
On one side is the old stone church, the first church in to provide pews without charge to any who came to worship.
On the other side is the Conwell Annex, an old brick building that once housed Sunday School, and now provides overflow classrooms for a middle school three blocks away. It has grills on the windows, lots of painted-over graffiti.
I’m surrounded by kids: tiny kids leaning against my legs, bigger kids, catching my eye and mugging for a smile. Teens, some from my suburban church, some from the surrounding neighborhood, a bright mix of sizes, colors, personalities, all wearing team tee shirts and name tags. Singing.
The song we’re singing is King of Kings and Prince of Peace, Jesus! Allelujah. Behind us cars screech across pot holes. Neighbors sit on porch steps, smoking, watching. A few blocks off the el rattles by. Sirens nearly drown out our voices.
Again, faster: King of Kings and Prince of Peace, Jesus, Allelujah. I’m remembering that feeling of being tired before I start, overwhelmed by the need around me. Not sure our team is up to the task, not sure we can make even a tiny a dent in the sadness and anger and brokenness that surround us.
Yet as we sing I’m reminded of what Father Graff, St. John’s now-retired vicar, has told me more times than I can remember: we’re not called to be successful. We’re called to be faithful.
I’m reminded of what I’ve seen again and again: our small offerings are multiplied, like bread and fish, far beyond our imagining.
And I feel that peace beyond understanding, that peace promised and received by faithful followers of the Prince of Peace across the centuries, around the globe.
I’m not yet sure what it means to be faithful in our current political context, not sure what it means to be a fully-devoted follower of Christ in a confused, divided, complex world. Yet as I pray, I picture a Christian community that loves what God loves, that speaks, lives, and stands firmly for compassion, forgiveness, mercy and healing in a way that reflects Jesus himself.
And I ask God to trust me with some small piece of that, as Jesus trusted the loaves and fish to the hands of his doubting disciples.

Please join the conversation. Your thoughts and experiences in this are welcome. Look for the "__ comments" link below to leave your comments.