The Spirit of the Lord is on me,
because he has anointed me
to proclaim good news to the poor.
He has sent me to proclaim freedom for the prisoners
and recovery of sight for the blind,
to set the oppressed free,
to proclaim the year of the Lord’s favor.

Decades ago, at our previous church, a new parish priest invited the congregation to join him in memorizing the passage above, Luke 4:18-19.

It was his way of announcing that our role, as Christains, was to follow Christ in enacting that anointing: proclaiming good news to the poor and freedom for prisoners, aiding in recovery of sight, actively, courageously, setting the oppressed free.

Freedom is mentioned twice there: freedom for prisoner. Freedom for the oppressed.

As we give thanks this Memorial Day weekend for those who have sacrificed to further the cause of freedom, I find myself wondering: what does it mean, now, today, to proclaim freedom for prisoners, to set the oppressed free? 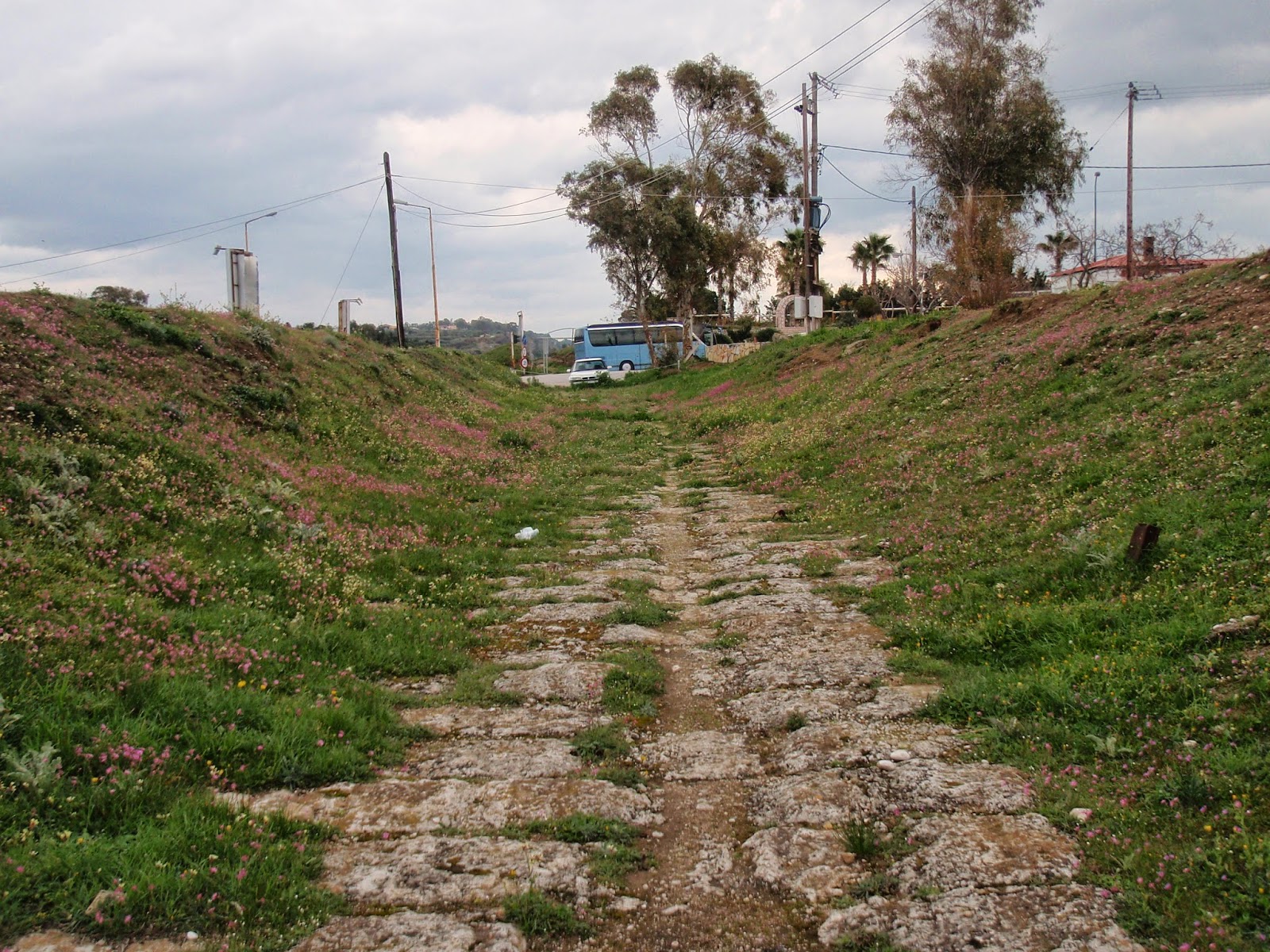 During our travels to , we spent a day in , one of the wealthiest commercial cities during the time of Christ.

We visited the the diolkos,  the paved passageway that allowed a five mile portage of ships across the Isthmian strait from the Aegean to Ionian Sea, and we stopped by the ruins at Kenchreai , the Corinthian port that served the trade routes heading west to Rome and other European ports.

Periodic earthquakes (most recently in 1858) prompted a population shift to an area several miles northeast of the original city, allowing more extensive archaeological investigation of ancient site than in cities like Thessaloniki, or even Athens, where new building has continually taken place on top of old.

Our group walked through the agora, often translated “marketplace” in the New Testament but, as our guide Costos Tsevas explained, more accurately “assembly” or “gathering place,” the center of political, philosophical, civil discourse.

We gathered on the bema, the stone platform where citizens came to receive awards, face punishment, or take their allotted three minutes to present their point of view.

We saw the broken stone pillar, strangely worn and etched, reputed to be the post where prisoners, including the Apostle Paul, were beaten.

And we stared up at the Acrocorinth, the imposing castle high on the monolithic rock where the wealthy of the city lived in the shadow of the .

Costos described the role of the pornai and heterais who plied their trade through the city streets, offering mystical union with the goddess through sexual encounter, and wearily carrying their profits up the steep road to the Acrocorinth.

The pornai were among the lowest tier of slaves, sent out by their owners to collect what they could of the currency flowing through the city. The heterai were more elite sex workers, in most often owned by the . Around 2 BC, an observer, Strabo, wrote:

“The was so rich that it employed more than a thousand hetairas, whom both men and women had given to the goddess. Many people visited the town on account of them, and thus these hetairas contributed to the riches of the town: for the ship captains frivolously spent their money there, hence the saying: ‘The voyage to is not for every man’.

Standing among the rocky ruins of , I could feel the weight of oppression: worship of a goddess who ensnared both men and women, physical enslavement enforced through force, sex used to further commerce, a sharp divide between wealthy owners and the miserable underclass, living only to serve the whim of the rich.

Paul, and those who joined him, proclaimed freedom: freedom from bondage to gods and goddesses who offered nothing and demanded constant sacrifice of wealth, wine, animals, captives, slaves, maybe even children (as when King Agamemnon sacrificed his daughter Iphigenia).

Freedom, as well, from a culture that used sex as currency and considered trade a value far higher than compassion or human dignity.

Freedom from participation in evil and the resulting condemnation.

Paul didn’t advocate immediate freeing of every slave, an impossibility in an economy where more than half the population was held in slavery and a large percent of non-slaves lived on the edge of starvation. He did, though, hold up a vision in which slave and free would be treated as equal, where generosity and kindness took priority over profit. In the short book of Philemon, he asked that the runaway slave Onesimus be treated as his own son, embraced as slave-owner Philemon’s brother, be given whatever privilege or hospitality Paul himself would receive.

Costos led our group to an inscription set in stone near the ancient theater of Corinth:

"Erastus in return for his aedileship laid the pavement at his own expense.” 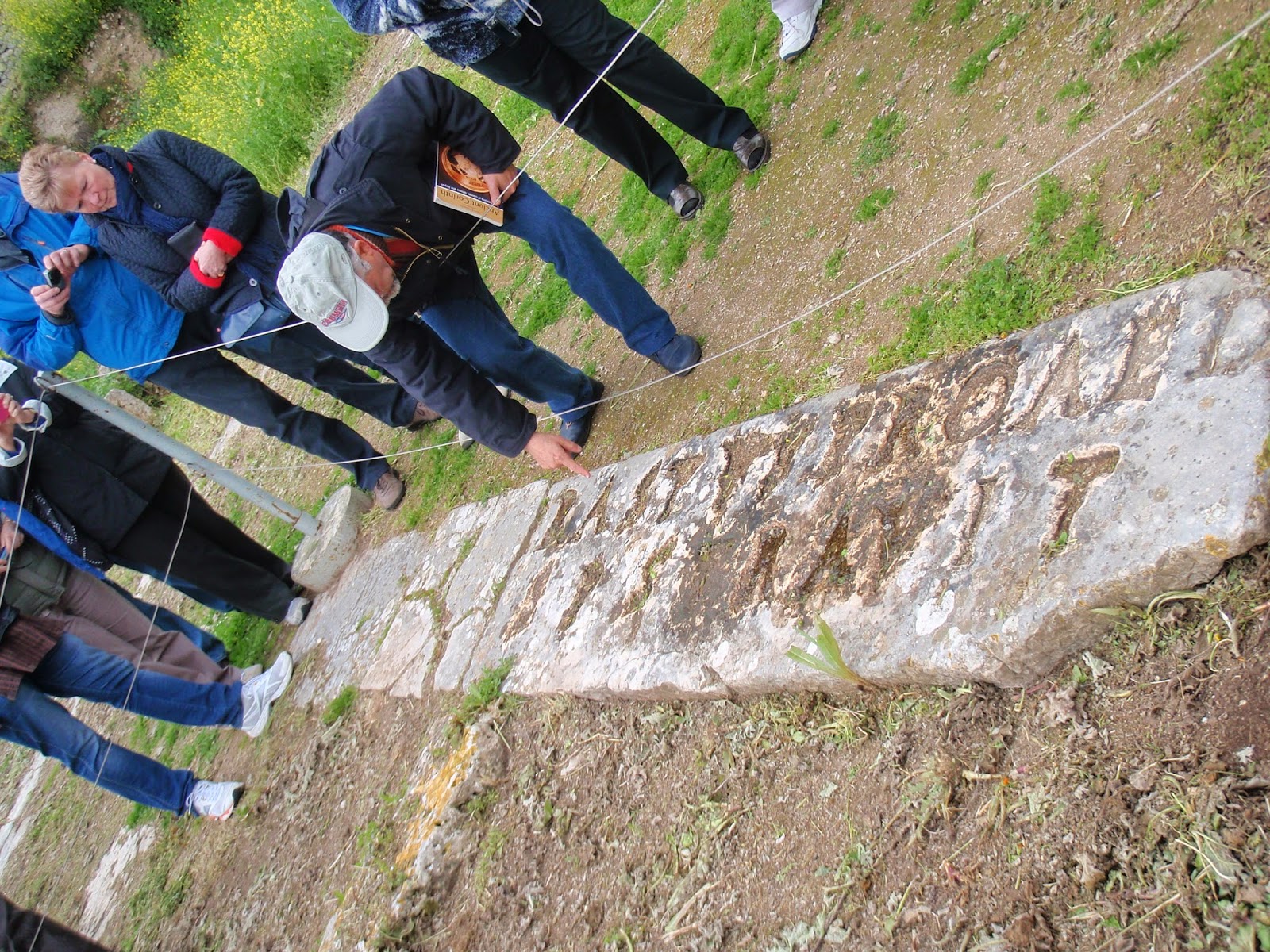 The tradition was for wealthy citizens in prominent political positions to underwrite capital improvements during their time in office. This Erastus, as an “aedile,” would have been responsible for public buildings, festivals, and enforcement of public order, and the pavement would have been evidence of his time in office, his commitment to , as well as of his wealth.

Was he the same Erastus mentioned by Paul as a city treasurer (Romans 16:23), then coworker in the early church? (Actrs 19:22, 2 Timoty 4:20).  Costos quietly pointed out that if some of the church in were former temple prostitutes, now set free to pursue a new life, someone must have provided the funds to free them. Erastus, as a prominent citizen, would be a likely candidate to make that happen.

Certainly, the evidence trail on that possibility iscontested, yet it raises the question: in a society so deeply divided, with wealthy merchants living like kings, and others crowded into hovels, this good news Paul proclaimed would demand a radical shift on the part of the wealthy: to open their homes to the poor and enslaved, to sit beside those they had been trained to consider “andrapodon,” “one with the feet of a man,” as opposed to “tetrapodon” or "quadruped", the term used to designate animal livestock.

In his letters to the Corinthians, Paul made clear that a genuine understanding of the new "way" Jesus offered would require followers of Christ to become servants of each other, putting the needs of others first, choosing to do what would ensure the health and growth of the weakest, poorest member. Paul repeatedly asked the Corinthians to consider themselves slaves to each other: even to the least shonored. The one of no reputation.

As I track through the history of the church and of slavery, it seems to me that one gauge of the church’s health and witness is it’s willingness to embrace the cause of the slave and to stand against whatabolitionist William Wilberforce called “the mortal disease of all political communities”: the innate self-centeredness “that clouds our moral vision and blunts our moral sensitivity.”

This week’s Time magazine (May 26, 2014) carries an article titled “Bring Back All Girls: What the 276 Girls Abducted from a Nigerian School Tell Us about Human Trafficking.”

What the article tells us: nearly 30 million people worldwide are exploited and treated like property.

4.5 million of those are subject to sexual exploitation.

A thriving market in prostitution and forced marriage enjoys enormous profits from the misery of uneducated, unprotected girls.

Human trafficking is now the second largest global criminal activity, second only to the drug trade.

But I’m haunted by a scene I watched in a rest stop outside one evening. I was traveling home on I-95, the road that connects the northeastern cities, and saw a young teen girl and woman in the rest room.

Something didn’t seem right: the girl’s clothes not quite what a girl traveling with her family would wear on a Saturday night, the woman watching a little too closely. As I headed out toward my parked car, they exited in the opposite direction, toward the lines and lines of trucks.

Sometimes we see but don’t see.

Know but choose not to know.

The Polaris Project, a national non-profit committed to ending human trafficking in the , offers a 24-7 hotline, for anonymous tips, calls for help, questions about how to spot traffickers.

In the heart of the biggest hotspot.

It’s easy to grieve the slavery of , lament the evil of the cross-Atlantic slave trade.

Harder to acknowledge that more people are in slavery today that at any previous time in history. Some not far from my home, along the routes I travel.

I still wonder: How?

This is the third in a series, Texts in Context, revisiting two weeks spent in Greece.
Earlier posts:

As always, your thoughts and comments are welcome. Just click on   __comments below to see the comment option.

Posted by Carol Kuniholm at 4:28 PM