When I left my position as youth director at the Church of the Good Samaritan, almost five years ago, I planned to take three months of “Sabbath” while discerning what might come next. 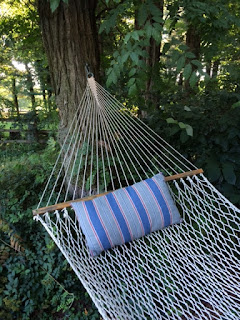 It’s interesting how much discussion that simple word, “Sabbath,” sparked.

I was trained to stay busy. I can sleep late- but rarely. I can hang in the hammock – if I’m reading something useful, planning something in my head, or taking a short break from the gardening at hand.

The time went quickly, helped along by Dan B. Allender’s book named, simply. Sabbath. What I enjoyed about Allender’s approach was his idea that Sabbath is a way to reset the defaults inside us, reorient our vision, and find our place again in the larger plan.

I had always thought of Sabbath as partly about rules, and partly about rest.  Both, I confess, bore me. And who would want three months of either?

Allender suggests that the key to Sabbath is joy. Puzzling over God’s “rest” on the seventh day described in Genesis 2, Allender suggests “it should be obvious that God rests not because he was weary from his labor.” As Isaiah reminds us, “The Lord is the everlasting God, the creator of the ends of the earth. He will not grow tired or weary.”

Seems kind of obvious. But that suggests we’ve misunderstood some key point in the rationale for Sabbath. According to Allender:


Menuha is the Hebrew word for rest, but it is better translated as joyous repose, tranquility, or delight.  God didn’t rest in the sense of taking a nap or chilling out; instead, God celebrated and delighted in his creation.

Allender explores this theme of celebration and delight, our uneasiness with the idea that God desires our joy, and our preference for forging ahead on our own rather than pause long enough to see what wonders God has in mind. 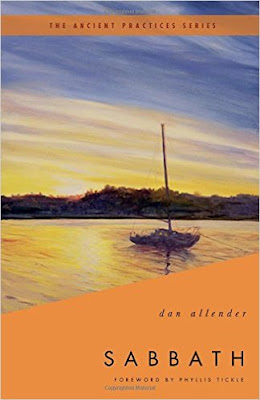 play. I honestly don’t remember, ever, hearing play discussed in the context of the Christian faith.

Five years ago I was grieving the loss of play as I stepped out of active youth ministry. I have never lost my love of play – Capture the Flag in the woods, Boggle around a ski lodge table, impromptu games imvented by teens in pajamas at a Girls’ Night lock-in.

One of the tragedies of American adulthood – even childhood! - is that play is so narrowly permitted. In fact, think about it: for American women past a certain age, what kind of play, if any, is allowed? Youth ministry gave me space to stand on my head, reenact “Three Chartreuse Buzzards,” practice my offense in foosball, trash talk the opposition during our legendary games of Golden Fleece.

Allender reminds his readers of the incredible value play offers as a way to step outside of what is and see what might be, just as a small child might try on a Superman cape to explore a very different persona. He quotes Jürgen Moltmann, a theologian who explores “the interplay of creation, liberation, future, and play”:

We enjoy freedom when we anticipate by playing what can and shall be different and when in the process we break the bonds of the immutable status quo . . . the significance of games is identical with that of the arts, namely to construct ‘anti-environments’ and ‘counter-environments’ to ordinary and everyday human environments and through the conscious confrontation of these to open up creative freedom and future alternatives. We are no longer playing merely with the past in order to escape it for a while, but we are increasingly playing with the future in order to get to know it. (Theology of Play)

I remember playing paintball several years ago with a middle school boy who was used to being discounted. Both he and I, I’m sad to say, had been considered extraneous by our highly-competitive team. Our captain had a strategy that didn’t include either of us, and feeling a little left out, we planned our own simple maneuver. To the surprise of both teams, my normally timid accomplice captured the flag and delivered it to the other team’s pole while I provided strategy and cover and shouted wild encouragement. It was just a game, yet the alternative environment, our freedom to act, our escape of our predetermined roles, shifted things in every direction.

Allender says, “Play redistributes power and gives the opportunity for convention to be reconfigured by the unexpected and the inconceivable.” This is true in games of every kind, but Allender is on to something bigger: What would it mean to play with God? It sounds faintly heretical. Does God play?

In a spiritual direction session a number of years ago, I mentioned some difficulties and challenges I was facing. I was invited to spend some time in silence, picturing those challenges and inviting God to show me his presence in the midst of them. I imagined a long, mountainous path, strewn with heavy boulders. The terrain ahead seemed so daunting I couldn’t imagine moving forward. Then, as I invited God to show me his presence, I had a clear sense of Jesus himself, running lightly over the tops of the boulders. He motioned to me to follow and I stood, unable to move, conscious of my own poor balance, my serious fear of heights.

“What would you like to do?” he called. “Shall we dance across? Should I carry you over? Or . . . ” I remember the unexpected sense of glee I heard – and felt - in his voice, “shall we heave them all out of the way? Like this?” In my imagination I saw him tossing the boulders that troubled me, flinging them like Frisbees, bouncing them like weightless balloons.

I caught a glimpse of delight and play in that moment of meditation. My own approach to problems had always been much heavier. Yet, as I've seen so often since, to God every challenge is an occasion for him to show his grace, his strength, his goodness, an “opportunity for convention to be reconfigured by the unexpected and the inconceivable.” A chance to break through my narrow view with his greater, more joyful reality.

The path leading up to that time of Sabbath felt a bit like the imagined path littered by boulders. In every direction lay uncertainty, challenge, difficulty, even dread. In the years since, I’ve experienced a sense of being lighter on my feet, less fearful of the heights around me, in many ways, more playful.

I’ve been drawn more deeply into new possibilities, unimagined opportunities, reconfiguring of the status quo in my own life and in structures far larger. I take time each day to listen, to enjoy “menuha”: respose, tranquility, delight. And I work hard in ways I can only describe as all-out, unexpected fun.

This summer my husband, Whitney, has found himself in his own three month sabbatical. Unlike mine, his will end with a reinvestment in the ministry he’s been part of for the past eighteen years. But for both of us it’s been a time of learning to hold even more lightly, to trust more deeply, to explore more fully Jesus’ invitation in Matthew 11: 29:

Take my yoke upon you and learn from me, for I am gentle and humble in heart, and you will find rest for your souls. For my yoke is easy and my burden is light. 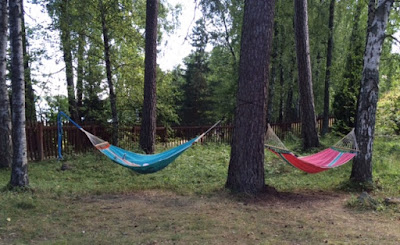 [This summer I'm reworking some earlier posts, as travel and time outside limit my time for blogging. This blog appeared, in slightly different form, on July 31, 2011]

Please join the conversation. Your thoughts and experiences in this are welcome. Look for the "__ comments" link below to leave your comments.
Posted by Carol Kuniholm at 1:04 AM