What I'd Give: Resolute Hope 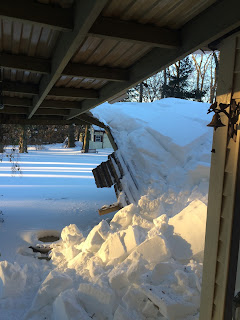 Our so-far mild winter disappeared yesterday morning in a swirl of snow and wind, with knee-deep snow when we first went out to shovel, and pathways drifting over as fast as we could clear them.

Forecasters pronounced it the blizzard of the century, a top-ten winter storm. Our patio roof collapsed beneath the weight, while the neighborhood birds gathered to share the seed and suet I set out for them in the hours before the storm began.

What if winter came, and never left?

I find myself thinking of Narnia, in The Lion, the Witch, and the Wardrobe, a land caught in the grasp of a hundred-year winter, a bleak frozen world that was “always winter, never Christmas.”

Some residents of Narnia had given up hope, had slipped into allegiance to Jadis the Usurper, the wintry White Witch. Others watched for signs of change, maintained confidence that the world as it was was not the final story.

I’ve been exploring the gifts I’d give if I could, the gifts that aren’t mine to give. Hope is a big one: a resolute hope that this world as it is is not the final story.

A never-ending winter is not very likely; our own snow will be melting before the week is over.

But what about a never-ending summer? Parts of the world once blessed with summer rains are rapidly turning into desert as drylands are over-farmed, trees are cut for fuel, climate change brings longer times of drought.

It’s easy to feel hopeless in the face of that reality. Easy to feel there’s nothing we can do.

King insisted on hope, so much so that the centerpiece of the memorial built in DC to honor him is called “the stone of hope,” a line taken from his most famous speech: 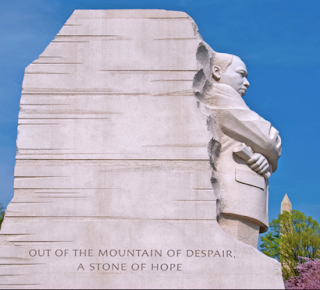 This is our hope, and this is the faith that I go back to the South with.

In Reality, Grief, Hope: Three Urgent Prophetic Tasks, Walter Brueggemann explains the role of hope in fueling opposition to the prevailing narrative. He describes a destructive economy insistent on unsustainable dependence on fossil fuel, fueled by military profit and its attendant violence, trapped in an exceptionalist vision that places a highly entitled “we” in eternal opposition to an always encroaching “them.”

Brueggemann catalogs “the despair-generating” epidemic of anxiety that confronts us:

In the face of that anxiety, according to Brueggemann, “The prophetic task is to articulate hope, the prospect of fresh historical possibility assured by God’s good governance of the future.” (119)

During my years of youth ministry, I sat, more times than I can count, in the presence of a young person grieving options squandered, trapped by bad decisions, fearful of the future.

And I've said, more times than I can count, “This is not the end of the story.”

I’ve seen that in my own life: great loss that led to new options and new avenues. Heavy sorrow that led to greater joy.

And we've seen the same through the pages of history: empires collapse, principalities flounder. New ways of living emerge.

If we are loved, as I believe we are, if there is a good God holding us and this world in his hands, our own worst mistakes are not the end of the story.

The broken systems of this world, the pervasive powers, the prejudice, dysfunction, violence, inequity, may burden us, and do us harm, but they don’t have the final word.

Jürgen Moltmann came of age during World War II and was drafted into the German army in 1944. He surrendered at the close of the war and spent the next three years as a prisoner of war. Tormented by “memories and gnawing thoughts,” he struggled with guilt, then found new faith, and hope, in reading the New Testament and Psalms given him by fellow prisoners. His Theology of Hope, published in 1964, explored the connection between faith and hope, and described the ways hope places us in opposition to the powers that surround us, enabling us to act in allegiance to God's greater vision:

faith, wherever it develops into hope, causes not rest but unrest, not patience but impatience. It does not calm the unquiet heart, but it is itself this unquiet heart in man. Those who hope in Christ can no longer put up with reality as it is, but begin to suffer under it, to contradict it. Peace with God means conflict with the world, for the goad of the promised future stabs inexorably into the flesh of every unfulfilled present. If we had before our eyes only what we see, then we should cheerfully or reluctantly reconcile ourselves with things as they happen to be. That we do not reconcile ourselves, that there is no pleasant harmony between us and reality, is due to our unquenchable hope" (Theology of Hope, 21-22). 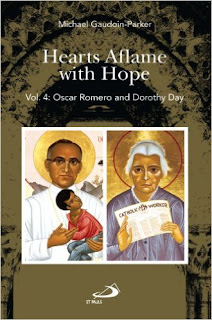 That unquenchable hope fueled William Wilberforce’s lifelong quest against the slave trade, gave MartinLuther King the strength to confront the injustices around him, drove Dorothy Day's work as suffragist, pacifist, and advocate for the poor and homeless, enboldened Óscar Romero to speak out against a violent, repressive regime. That same unquenchable hope has enlivened the work and witness of countless men and women across continents and centuries.

That same hope pulls me from bed every morning, pushes me forward in unexpected ways, cries out, in me and so many I know and love, against the sweltering summers of racism, injustice, environmental degradation.

Our hope is not in our own small offerings, but in the knowledge that the story isn’t over.

The forces of this world will not have the final say.

God’s love – greater than ours, more powerful than ours – will reconcile, renew, restore in ways beyond our understanding.

Our hope in that love, our faith in that reality, gives us courage, conviction, and the ability to live and love in ways that defy the dominant narrative of our day.

I can't give you that hope. But I can pray:

I pray that the eyes of your heart may be enlightened in order that you may know the hope to which he has called you, the riches of his glorious inheritance in his holy people, and his incomparably great power for us who believe. That power is the same as the mighty strength he exerted when he raised Christ from the dead and seated him at his right hand in the heavenly realms, far above all rule and authority, power and dominion, and every name that is invoked, not only in the present age but also in the one to come. (Ephesians 1:18-21)

May the God of hope fill you with all joy and peace as you trust in him, so that you may overflow with hope by the power of the Holy Spirit. (Romans 15:13)