As we slog towards election day, it seems more and more difficult to speak of political matters without raised voices, wild assumptions, uncharitable accusations. Just deciding whether to watch the debates was cause of anxiety in many households. 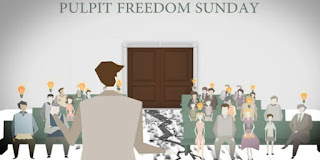 “Why watch? Why vote?” some ask, while others are certain any vote other than the one they have in mind would be an act of heresy contributing to the immediate destruction of the American nation.

Today (October 7), has been deemed “Pulpit Freedom Sunday.” An estimated 1400 preachers will take to their pulpits to record sermons specifically endorsing candidates.

Should preachers endorse specific candidates? What happens when “faith leaders” proclaim that one candidate is God’s choice, only to see that candidate flounder; then proclaim another as God’s choice, despite that candidate’s repeated infidelities and profound selfishness and dishonesty? What happens when those same leaders now stand in their pulpits to tell their congregations to vote for a man they insisted, just months ago, no Christian should vote for?

In A Public Faith, How Followers of Christ Should Serve the Common Good, Miroslav Volf describes what he calls “malfunctions of faith”:


"In the course of Christianity’s long history – full of remarkable achievements by its saints and thinkers, artists and builder, reformers and ordinary folks – the Christian faith has sometimes failed to live up to its own standards as a prophetic religion. Too often, it neither mends the world nor helps human beings thrive. To the contrary, it seems to shatter things into pieces, to choke up what is new and beautiful before it has a chance to take root, to trample underfoot what is good and true. When this happens, faith is no longer a spring of fresh water helping good life to grow lushly, but a poisoned well, more harmful to those who drink its waters than any single vice could possibly be "(4).

The malfunctions Volf describes are all fully at play in our current condition:

Functional Reduction: In this malfunction, practitioners "employ religious language to promote perspectives and practices whose content and driving force do not come from or are not integrally related to the core of the faith"(10). Volf suggests that this is not a result of "bad faith" or intentional manipulation, but instead "the language of God is hollowed out from within, maybe by lack of trust and inconsequential use, until only a shell remains. And then that shell is put to what are deemed good uses."

Volf charitably refrains from current examples of these malfunctions, but examples aren’t hard to find: discourse that promises God’s condemnation if a particular party loses, or that claims prophetic vision when situations make clear the vision is far more pragmatic than prophetic.

Idolatric Substitution: Volf speaks of this only briefly, recounting the story of Moses, Aaron, and the golden calf, and asking his reader to imagine a scene in which Aaron waits patiently as Moses returns, not with tablets of stone, but with the golden calf:


“The prophet himself would have now engaged in idolatric substitution. He ascended the mountain to meet with God, but he has returned with an idol. Impossible? It happens every day, and to the best of ordinary prophets.  . . 'Take up your cross' morphs into 'I'll bring out the champion in you,' or the cross itself becomes a symbol of destruction and violence rather than of creative love that overcomes enmity." (12)

Again, Volf doesn’t offer contemporary examples, but my mind goes back to the procession last fall of Occupy Wall Street supporters carrying a golden calf through the streets of the Manhattan financial district, lamenting the way love of profit has replaced concern for the common good. False idols are rampant. Party, profit, country, security: all are held high by those claiming to speak for God himself.

Coerciveness of Faith: Volf devotes a chapter to this, and explains that while simply speaking of our faith may seem coercive to those who don’t share it, it is possible to speak of faith in ways that respect the other. He talks of 'thick faith' and 'thin faith,' suggesting that a zealous, unthinking Christianity can promote godly goals in immoral ways. Adherents of 'thin' faith 'have used and continue to use their faith to legitimize violence they deem necessary, and they have done so on a massive scale"(53). As Volf makes clear, coercive behavior has no place in the legitimate "thick" expression of Christian faith:


“Whenever violence was perpetrated in the name of the cross, the cross was depleted of its 'thick' meaning within the larger story of Jesus Christ and ‘'thinned' down to a symbol of religious belonging and power – the blood of those who did not belong flowed as Christians transmuted themselves from followers of the Crucified to imitators of those who crucified him."

Volf’s restraint in not offering examples is admirable; again, it’s not hard to find coercive expressions of Christianity, both past and present. Violence, hinted violence, abusive speech, scapegoating: all are tolerated, even encouraged, by those who claim identity with the prince of peace.

Idleness is a less visible malfunction, but possibly more widespread. Some people are stuck in an idle faith because they "pick and choose, as in a cafeteria, filling their tray with sweets but leaving aside the broccoli and fish." Others "find themselves constrained by large and small systems in which they live and work . . . they feel that they must obey the logic of those systems, not the demands of the faith they embrace." Yet others deem faith irrelevant to contemporary issues. "With these three reasons for faith’s idleness combined, no wonder people misconceive faith and treat it as  performance-enhancing drug or a soothing balm rather than as a resource to orient their life in the world." (23-24)

For those with "idle" faith, there seems no reason to connect faith and politics: faith is irrelevant to the challenges of the day; the systems that govern economics, education, polity have their own demands impervious to spiritual concerns.

Volf posits "engaged faith" as the alternative to the malfunctions. His ideas on this are well worth reading, especially in light of his willingness to talk about avenues of respectful engagement in a pluralist world where we begin from different places.

My own growing concern is not with the malfunctions Volf outlines so convincingly, but with another: what I’ll call "silent" faith.

I know many faithful followers of Christ who are alarmed at “God-talk” that promotes partisan ends, who are not convinced by the equation of faith with patriotism, capitalism, or party politics. I know faithful Christians who shake their heads at coercive Christian speech, and sacrifice time, resources, creativity to serve and love those they know and don’t know.

Unfortunately, many of those faithful followers I most admire are silent on political matters. They don’t want to be offensive, they don’t want to stir up anger, they are advocates of peace, and draw back instinctively from conflict.

Yet, in their silence, they miss an opportunity to give voice to those who can’t speak for themselves, and allow angry factionalism to shape our public discourse.

In a thoughtful chapter on "Public Engagement," Volf advocates a public square that makes room for all to speak.


"Encounters with others don’t serve only to assert our position and claim our territory; they are also occasions to learn and to teach, to be enriched and to enrich, to come to new agreements and maybe reinforce the old ones, and to dream up new possibilities and explore new paths. This kind of permeability of religious individuals and communities when they engage one another presupposes a basically positive attitude toward the other – an attitude in sync with the command to love the neighbor and, perhaps especially, to love the enemy."(133)

Professor of theology at Yale Divinity School and director of the Yale Center for Faith and Culture, Volf has been modeling public engagement himself in an ongoing conversation on his facebook page, introducing values he considers worth discussing, offering rationale and avenues for debate, and suggesting questions we might ask of political leaders. While his page is private, it’s possible to subscribe to posts, and read the issues and responses. Just a sampling:

We can practice both faith and politics in ways that demonize the other and make barriers more and more difficult to cross, we can withdraw into our own safe cocoons and hope it all ends well, or we can see the political arena as one more opportunity to love God with our whole hearts and minds and our neighbors as ourselves. My prayer is that we choose the latter.

This post is part of the October Synchroblog on Faith and Politics. Other bloggers writing on faith & politics this month:

This is also part of my own continuing series about faith and politics: What's Your Platform? Join the conversation.  Look for the "__ comments" link below to leave your comments.

Posted by Carol Kuniholm at 8:20 AM