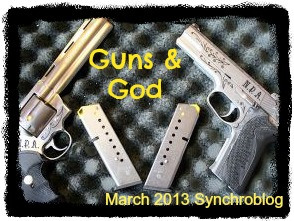 The Synchroblog topic this month is “Guns and God”:

Do guns and God go together?  Why or why not?
How are you wrestling with this issue in your own life?
How are you respecting the difference of opinion in the wider community and also honoring your own convictions about violence?
What do you think Jesus would do?

I’ve posted about guns in the past year from a variety of angles:

Blessed are the Peacemakers, about the strong peace witness of the early church, and the fact that the now spends more on military defense than the next fourteen nations combined.

Guns and Good News, about the NRA, ALEC (the American Legislative Exchange Council), and the gun industry dollars that propel the relentless, dishonest "they're going to take our guns away" anti-gun-control lobby.


Choosing Life, about a wider pro-life stance that addresses our culture of violence and dependence on guns for a sense of safety.

As I continue to wrestle with issues of guns, gun control, and a misguided trust in violence as a way to solve our problems, I've noted other angles to consider:

Research suggests that guns in homes are a health risk to those in the home, both in a significant rise in accidental death, and significant increase in successful suicide, with no evidence of household guns as deterrent to crime, or protection for those who own them:

A recent Time article highlights the danger of assuming guns will make us safe, explaining that even well-trained, well-practiced officers freeze, shut down, act erratically, or misfire in the face of extreme, unexpected stress:


In the police department . . . officers involved in gunfights typically hit their intended targets only 18% of the time, according to a study. When they fired 16 times at an armed man outside the last summer, they hit nine bystanders and left 10 bullet holes in the suspect—a better-than-average hit ratio. In most cases, officers involved in shootings experience a kaleidoscope of sensory distortions including tunnel vision and a loss of hearing. Afterward, they are sometimes surprised to learn that they have fired their weapons at all.

Another issue lurking behind much second amendment discussion: What is the Biblical response to oppressive government? The argument for assault rifles and unregistered guns often rests on the rights of citizens to protect themselves from repressive authority. For those who claim to follow Christ, this leads back to the witness of the early church: “For the first three centuries of the Christian church, a hallmark of the Christ-follower was a willingness to face persecution, punishment, even death, rather than pick up sword or stone in self defense.” Jesus repeatedly rejected the idea of violent response to unjust governance, and expected his followers to do the same. As he told Peter in the garden of , “If you live by the sword, you die by the sword.”

On a pragmatic level: if the shoot-out between government and citizens came to pass, as survivalists and right-wing alarmists predict, how would assault weapons fare against drones, bombs and the other weaponry at the military’s disposal? Do we want to allow citizens the right to stockpile tanks and missiles? Drones? Fighter jets?

But this week, I’m looking at guns from another angle. I’ve been working my way through the beatitudes, and today I’m puzzling over the idea of mercy.

Mercy is another of those words that loses much in translation. The Greek word, "eleos," points back to the Hebrew word, 'checed,' or “hesed,” sometimes translated as mercy, sometimes as compassion, sometimes "loving kindness." It suggests leniency toward offenders. Lightening of a penalty. Restraining from harming an enemy. Help for those in distress. Clemency. Amnesty. Kindness. Forgiveness. Provision for those who don’t deserve it.  Pardon. Reprieve. Respite. Deep awareness of and sympathy for another's suffering, often in a situation of crisis: war, disease, enslavement, criminal offence.

In the Old Testament, the merciless resort to violence:

“Their bows will strike down the young men; they will have no mercy on infants, nor will they look with compassion on children.” (Isaiah 13)
“They are armed with bows and spears; they are cruel and without mercy. They sound like the roaring sea as they ride on their horses; they come like men in battle formation to attack you.”  (Jeremiah 6, and again in Jeremiah 50)

The merciful set aside their arms, offer forgiveness and restoration. The example of mercy, again and again, is God himself:

“I am in deep distress. Let us fall into the hands of the Lord, for his mercy is great; but do not let me fall into human hands.” (2 Samuel 24 / 1 Chronicles 21).
“In my alarm I said, ‘I am cut off from your sight!’ Yet you heard my cry for mercy when I called to you for help.” (Psalm 31)
“In all their distress he too was distressed, and the angel of his presence saved them. In his love and mercy he redeemed them; he lifted them up and carried them all the days of old.” (Isaiah 63)

I sometimes struggle with the violence of the Old Testament, a topic for another day. But Jesus, in the New Testament, makes very clear that violence will never bring peace and can never bring the righteousness God desires:

“You have heard that it was said, ‘Eye for eye, and tooth for tooth.’ But I tell you, do not resist an evil person. If anyone slaps you on the right cheek, turn to them the other cheek also."
“You have heard that it was said, ‘Love your neighbor and hate your enemy.’ But I tell you, love your enemies and pray for those who persecute you.” (Matthew 5) 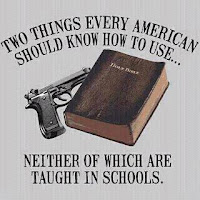 As the prophets insisted, the sacrifice God desires is justice, mercy, humility, love, all demonstrated, personified, enacted by Jesus on the cross. His response to violence was mercy, compassion, forgiveness "Father, forgive them." We are called to be like him, not to grab our guns and shout “over my dead body!”

I've had little opportunity to confront real violence in my own day-to day life. I've lived, worked, traveled through places some might consider dangerous, but I've never carried a gun, and never wanted one. I've wondered, from time to time, how I would respond if small circumstances escalated. I've occasionally imagined disaster. When my imaginings have led to anxiety, or images of retaliation, I've worked hard to set those imaginings aside, trusting myself to God’s mercy, praying for protection.

The violence I've experienced more often has been verbal. Online, in person, behind my back, I've been attacked, labeled, threatened, sometimes verbally abused. At times I've found myself fearful, or angry, or deeply devalued. I've considered angry responses, been tempted to label as I've been labeled.

It’s at that place, in the discussion about guns and other polarizing issues, that I find myself wondering about mercy.

"Blessed are the merciful, for they shall receive mercy."

That Hebrew word, 'checed,' or “hesed,” carries the definitions mentioned earlier, but another, even harder meaning: the ability to identify so closely with the other person’s pain it becomes our own.

Scottish theologian William Barclay, in his commentary on this beatitude, wrote:

"O the bliss of the man who gets right inside other people until he can see with their eyes, think with their thoughts, feel with their feelings, for he who does that will find others do the same for him and will know that that is what God in Jesus Christ has done."

I’m not sure I’d call this “bliss.” I find it deeply troubling to try to see through the eyes of people consumed with anger, motivated by fear, ready to retaliate. I try hard not to live in a place that feels that dark.


And I work hard to avoid voices of “unreason,” voices that try to incite fear, anger, disrespectful opposition, voices motivated by hidden financial interest or an insatiable desire for political power.

I recoil from a view of the world so absent of grace that our best bet is to put guns in every school, arm ourselves against neighbors and our own elected leaders, prepare for the inevitable worst descending toward us as we sleep.

How do I express mercy in that place of inner discord?

How do I listen, when I know I’m not heard myself?

And how do I listen, when I’m so deeply troubled by what I hear?

"To listen is very hard, because it asks of us so much interior stability that we no longer need to prove ourselves by speeches, arguments, statements, or declarations. True listeners no longer have an inner need to make their presence known. They are free to receive, to welcome, to accept.

"Listening is much more than allowing another to talk while waiting for a chance to respond. Listening is paying full attention to others and welcoming them into our very beings. The beauty of listening is that, those who are listened to start feeling accepted, start taking their words more seriously and discovering their own true selves. Listening is a form of spiritual hospitality by which you invite strangers to become friends, to get to know their inner selves more fully, and even to dare to be silent with you." (Bread for the Journey: A Daybook of Wisdom and Faith)

Is listening an act of mercy?

I’m not sure, but it might be a place to start.


This post is part of the March Synchroblog. Visit the other sites, and join the conversation!
This is also the fifth in a series on Lent and the Beatitudes:


An  Alternative Narrative: February 10
Seeking Blessing in a Fracture Land: February 17
The Poor in Spirit and Those Who Mourn: February 24
Hungering Far Past "Rightness": March 3