We live in a battered, broken world.

I’ve lived in that knowledge since I was very small. My own family was shattered before I was two, and I grew up with a clear, uncluttered view of abandonment, betrayal, mental illness, abuse, and a good sampling of the damage self-deception can inflict.

Even so, I’m still sometimes surprised at how deep the damage goes, how universal the pain, how tight the bonds of deception and delusion.

A day of rejoicing.

But this year, as I’ve moved through Lent, I’ve been more aware than ever how desperate the
situation.

I’ve watched good families gasp in astonishment as the cold hands of an addictive culture reach out to shred their sense of sanctuary.

And I’ve seen the burden of betrayal close in on faithful men and women who have believed that doing good will keep them safe.

I’ve mourned at wrong-headed leaders more committed to their own careers than the good of the people they serve.
I’ve waited as death swallowed gentle friends far younger and braver than I.

through Jesus’ trial on Friday, I was struck, more than ever, by his lack of surprise. His calm acquiescence. His refusal to refute, to react, to strike out in return.

He had seen what death and decay look like, had touched the most hideous of diseases, had stared down jealousy and hatred, watched the fury of self-righteous crowds.

He knew what he was in for, and walked through it with one goal in mind:

The upending of the current order.

The swallowing of death in life.

The conquering of hate through all-embracing love.

While accusers and followers saw death and defeat, he was shouldering his way toward the inexplicable, inconceivable realignment of the planet, a reimagined universe that would bring hope to the hopeless, courage to the fearful, eternal, vibrant life to those already counted dead.

I’ve been puzzling over an old poem by Dorothy Sayers:

The Choice of the Cross
Hard it is, very hard,
To travel up the slow and stony road
To , to redeem mankind; far better
To make but one resplendent miracle,
Lean through the cloud, lift the right hand of power
And with a sudden lightning smite the world perfect.
Yet this was not God's way, Who had the power,
But set it by, choosing the cross, the thorn,
The sorrowful wounds. Something there is, perhaps,
That power destroys in passing, something supreme,
To whose great value in the eyes of God
That cross, that thorn, and those five wounds bear witness.

I have felt the longing to “smite the world perfect,” have wondered, more times than I can count, why God won’t “lean through the cloud” with that “one resplendent miracle,” but I’ve also watched the harm, as parent, friend, mentor, of moving too quickly, reaching too far, in a way that diminishes and destroys despite the good intent.

How much harder to wait: to allow time, to stand with outstretched hand, to pray for that flickering inner spark to strengthen and grow.

In my mind the soundtrack for Easter has always been loud, joyful, victorious: a brass band at daybreak in a city park, hundreds of voices singing the chorus from Handel’s Messiah.

But rereading, rethinking, it’s occurred to me that there’s an embracing quietness in the encounters of that long ago Sunday.

Nothing grand. Nothing showy.

No resplendent display of power.

Mary Magdalene, passing Jesus in the garden, thought he was a gardener until he spoke her name.

Peter, stooping to look in the empty tomb, met not a company of angels, but one quiet herald with the news: “he isn’t here.”

The two on the road to Emmaus, in quiet conversation with a stranger, only recognized him as he left them, sitting alone with their evening supper.

Even in Easter, we want something big. Overwhelming. Finally convincing.

What we get is a wounded side, and Jesus, cooking fish over an open fire on a sandy beach while his friends wrestle with their nets.

From the outside, it seems a little quiet. Even small.

Yet, from the inside out, everything has changed.

And continues to change.

Hope bubbling up in places where hope is impossible.

Steadfast, enduring kindness, in the hardest of places, to the most destitute and forgotten.

Joy, exuberant joy, when the signs all point to failure.

Something there is, perhaps,
That power destroys in passing, something supreme,
To whose great value in the eyes of God
That cross, that thorn, and those five wounds bear witness.

There are many miracles embedded in the story of the resurrection, but the one that puzzles me most is God’s focus on that unnameable “something.” That “something” is us, the inmost, essential humanness of us, cared for, protected, made new in the freshness of that Easter morning.

This is part of that mystery: that Jesus, newly risen from the dead, would meet his friends and call them by name. As if they – Mary, Peter, Thomas - were of utmost importance. Were each worth dying for. Were each of eternal value. Each invested with futures of great portent and significance.

That mystery continues. We are often too busy to listen, too burdened and clouded with our own doubt and grief, to hear our names spoken.

Yet men and women, children, who pause to listen find themselves called into lives beyond anything they imagined.

I’ve known men and women who came to know Christ in unusual ways:

A shy, fearful runaway who paused on a street corner to listen to an itinerant preacher, and heard instead the voice of Christ, and found herself rearranged, from the inside out: confident, courageous, with a new life and new future.

A young man on the way to rob a store who paused on a city sidewalk to hear another young man explain the good news of Christ, missed both robbery and arrest, and found his life changed forever.

A multiple offender, alone in his cell, reading a throwaway Bible another prisoner threw through the bars, suddenly hearing a voice of love, and miraculously convinced his life could have meaning.

A much-abused teen from a South American village, dragged to a youth retreat by a friend, flooded with such light in prayer that she went home with the gift of healing, joyful and alive in a way she had never imagined.

Those are people I know, whose stories I trust. 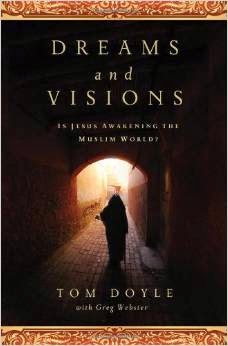 There are others I know at a somewhat greater distance: scientists like Francis Collins and Alistair McGrath who have discovered Christ in their exploration of genes and atoms; writers like C. S. Lewis or T. S. Eliot whose found resurrection joy breaking through their joyless unbelief.

People like Brother Yun, from rural China, who heard Christ's voice in a way that led him on an unimagined path of healing, miracles, travel around the globe,even to my own church in suburban Philly.

Sources say there are 350 million Muslims who have come to Christ through dreams and visions. Some share their stories in film, in books. Some speak of their visions on Facebook pages, or post youttube videos.

Witnesses across the continent, across the centuries, give thanks for the reality of resurrection, bringing hope where hope seems impossible, freedom from constraints of culture, poverty, illness, evil, oppression, sin.

It’s certainly true for me. In a broken, battered world, I am blessed with hope and joy made possible by the great reversal of resurrection morning.

In the jubilant noise of this Easter Sunday, I am listening, again, for that quiet voice that speaks my name, reminding me of the great value we hold in the eyes of God, reminding me that through Christ’s death and resurrection, as “that cross, that thorn, and those five wounds bear witness,” we are all claimed and called to something far more than simple dying flesh: immortal, priceless, loved.

This is the last in a Lenten series.